Ayaan Hirsi Ali on THE CARTOONS 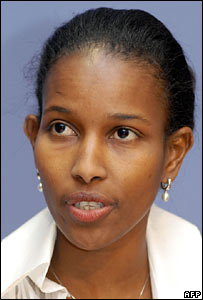 Why isn’t she running the world? She knows right from wrong, she and Malalai Joya are the two bravest people on the planet, and Ayaan has gone through trial by horror. She made a film with her partner, Theo van Gogh, about women in Islam. He got murdered for it. If anyone understands the price of free speech, it’s Ayaan. This is what she has to say about it:

The Somali-born Dutch MP who describes herself as a “dissident of Islam” has backed the Danish newspaper that first printed the Prophet Muhammad cartoons.

[She] said it was “correct to publish the cartoons” in Jyllands Posten and “right to republish them”.

Ms Hirsi Ali … said… “today the open society is challenged by Islamism”. … “Within Islam exists a hardline Islamist movement that rejects democratic freedoms and wants to destroy them.”

[She] criticised European leaders for not standing by Denmark and urged politicians [and I could think of a few others!] to stop appeasing fundamentalists.

She also said that although the Prophet Muhammad did a lot of good things, his decree that homosexuals and apostates should be killed was incompatible with democracy. … Ms Hirsi Ali said the furore over the cartoons had exposed the fear among artists and journalists in Europe to “analyse or criticise intolerant aspects of Islam”.