Handsome is as handsome does

Once upon a time I was filled with sick horror at the thought of a McCain Presidency. Now? Not so much. He hasn’t changed.  He does have a new running mate, but she doesn’t scare me.  After Dubya, it feels petty to pretend that inexperience is some kind of showstopper.  What’s changed for me is the growing sick horror with which I view an Obama Presidency.

Obama’s hope-and-change talk in the primaries turned into a vote for telco immunity. The all-together-now speeches came from a bus that ran over women, blacks (e.g.), gays, and anyone who cares about civil liberties.  The way he’s aided and abetted sexism to grab the nomination has been despicable, especially because he stayed alert to any sign of racism.  I don’t understand how anyone who cares about equal rights can support him after such a blatant display of contempt for women.  The list of appalling positions he’s taken just keeps getting longer.

Granted, McCain’s positions are even worse, but it’s not really what the candidates say that matters. It’s what they can do. And that depends on how much we let them do. That’s what horrifies me about an Obama Presidency: not him but us.

People will do two things if he’s in the White House. The first will give us another reign of Republicans after his one term. The second will be worse.

The Republican chickens are going to be coming home to roost in a big way in the next four years. If the Democrats have the House and the Senate and the Presidency, they’ll be cleaning up the mess and getting the blame. People, too many of them anyway, pin the fault on the visible target.  Based on his record, there is no reason to think Obama is a millennial statesman capable of leading us away from the mountain range of shit.  He may turn out to be, but he hasn’t been so far.  If he doesn’t succeed, the Republicans will gain power in 2012 for another eternity.  And they’ll get the benefit of however much clean-up the Democrats have managed to accomplish.  I say let the Republicans deal with their own mess. Then we have a hope of getting thirty years of actual improvement, such as, just maybe, actual universal health insurance instead of “We radically changed [the health care bill] in response to concerns that were raised by the insurance industry.” (Obama, 2004/05/19)

The other reason, the even bigger reason, is that I think Obama could do more damage to the country than McCain. People pretty much know what McCain stands for and whether they’re for it or against it. Good-looking governors make it a warmer ticket, but don’t change the fundamental equation. Obama, on the other hand, does one thing, says another, and enough people are so desperate to believe in him that they lie to themselves so that they can keep doing it. Look at the reaction on the left when he started promoting faith-based government. Suddenly the left, the left, was trying to find reasons why it wasn’t such a bad idea after all. The ability to make people believe night was day was Reagan’s talent. He succeeded in making selfishness respectable, and then even admirable. He could make people forget which way was up. It’s very hard to climb out of a morass if you can’t even see that.

Obama, judging by the evidence so far, has the same talent. Based on what he’s done rather than what he’s said, he’s a Republican. Maybe Republican-lite, but that’s not the important part. What scares me is the large majority who, a year ago, finally understood that they don’t want that crap.  But he can make them think they do.

That’s why I think Obama may be a bigger disaster for the country than McCain.

Using data from NASA’s Wilkinson Microwave Anisotropy Probe (WMAP), scientists have identified an unexpected motion in distant galaxy clusters. The cause, they suggest, is the gravitational attraction of matter that lies beyond the observable universe.

“The clusters show a small but measurable velocity that is independent of the universe’s expansion and does not change as distances increase,” says lead researcher Alexander Kashlinsky Betraying my essential nerdery, I have to admit I’m so excited about this I’m practically speechless. New physics! Other universes! Boldly going!

Right. Sorry about that. I’ll get back in my basket now.

To bail or not to bail

That is actually not the question. Not now.

The time to ask that question was four, five, six, and more years ago. The time to ask it was when the shadow banking system started growing. It was invented to avoid regulations. It made a lot of money doing it.

While the party was on, while yee-haa mortgages were driving up real estate prices and making everyone feel richer, while loans on that inflated home equity were keeping the economy afloat, nobody wanted to be the wet blanket on the house of cards.

That’s the real problem. No amount of new oversight bureaucracies will change the fact that when a party is on, nobody wants oversight. We had plenty of oversight in place. We just didn’t use it. The real solution to the current crisis would have been not to get drunk at the party in the first place. Anybody reading this blog already knows that. (So why am I saying it? I dunno. Just venting, I guess.)

But now what? Why should the innocent get stuck paying the bills of the guilty?

Because there’s no other choice. Not now.

The current bailout plan is estimated to cost about $2000 for every human being in the country. Leave aside the question of whether we may eventually recoup some or all of it. Say we don’t. Let’s also assume that’s an underestimate, which is probably a safe bet. Let’s say it’ll cost $4000. (I’m getting most of my information via Krugman and Calculated Risk. They have good analysis and lots of details. The $4000 figure is not from them. That’s just my pessimism.)

We don’t have a choice between spending $4000 or saving it for, say, a college education. At this point if there is no bailout, the global financial system literally would collapse. It was flirting with that on Wednesday last week. A financial collapse would shrink pension funds to shadows. You’d likely lose your job. Crime would skyrocket. That’s expensive for everybody, and beyond price for it’s victims. The list of ways a financial collapse would cost you goes on forever. It would cost you $4000 in the first week and then keep costing you for the rest of your life.

The choice is to spend $4000 or to spend hugely more than $4000. If we had a real government, it would be structured so that we got something back for our largesse. But we don’t. So even that’s not possible.

The only thing anybody could ever do about this situation is not succumb to smooth-talking politicians telling people what they want to hear.

Good luck with that.

Yowzer. This one has everything. Freedom of religion, fairness in the workplace, immigration, general free-floating bigotry. (But no sex, drugs or rock-n-roll, so maybe not everything.)

A meatpacking company Wednesday laid off about 100 Muslim immigrant workers who walked off the job last week in protest of the firm’s refusal to give them time to pray during the holy month of Ramadan. … The Muslim workers, mainly Somali immigrants, have recently flocked to the plant, replacing many of the 262 workers, mostly Latinos, who were detained as illegal immigrants following a federal raid in late 2006. … Some other Swift workers, however, were angered by the Muslims’ requests for extra prayer time. “Somalis are running our plant,” worker Brianna Castillo told the Greeley Tribune. “They are telling us what to do.” Non-Muslim workers complained they had to do additional work when Muslims went to pray, which devout followers do five times a day. … “Many companies pay time and a half for working Christian holidays,” Gonzales said. “It’s a different time now, and we should respect different people’s values.”

I’ve been thinking a lot about rights lately, and that took me to Wikipedia’s page on the Universal Declaration of Human Rights.

All human beings are born free and equal in dignity and rights. They are endowed with reason and conscience and should act towards one another in a spirit of brotherhood.

What is wrong with this picture?

Yes, the very next Article goes on to say, “Everyone is entitled to all the rights and freedoms set forth in this Declaration, without distinction of any kind, such as race, colour, sex, language, . . .” and so on through the usual list. But still. Language and thought shape each other. It’s not an either/or proposition.

And man (ahem) am I tired of the language. To say nothing of the thoughts. This primary and election season have sensitized me to the point where my reaction is about what it would be to poison ivy.

That first Article is proof I really didn’t need of the truth of Portly Dyke’s earlier post.

I went to LinuxWorld in San Francisco last month. A few highlights: 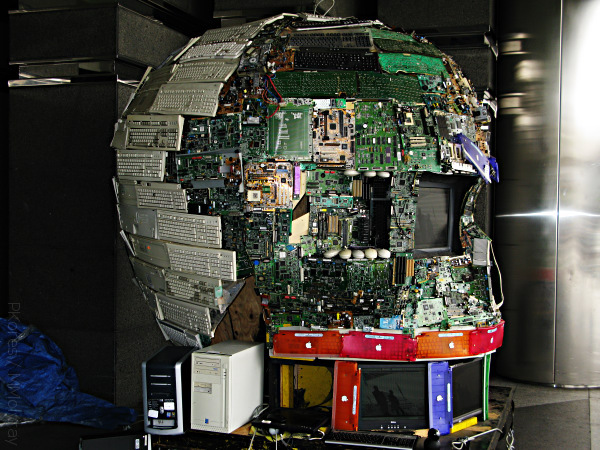 END_OF_DOCUMENT_TOKEN_TO_BE_REPLACED

It’s not the heat, it’s the stupidity

I’m sorry. I just can’t take it any more. I’m going to stop the world and get off. Yes, that’ll make the oceans slosh and drown everyone else. You should have thought of that before you bored me.

Okay, you ask. What is it now?

Drivel framed in drivel. (No, I don’t have a link to the original. I can’t be arsed. It’s in the Proceedings of the National Academy of Science.) Study: men with genetic variant struggle with commitment Or this one from the New Scientist: Monogamy gene found in people

What if you could tell whether a man is husband material just by peering at his genes?

END_OF_DOCUMENT_TOKEN_TO_BE_REPLACED

You are currently browsing the Acid Test by Quixote weblog archives for September, 2008.