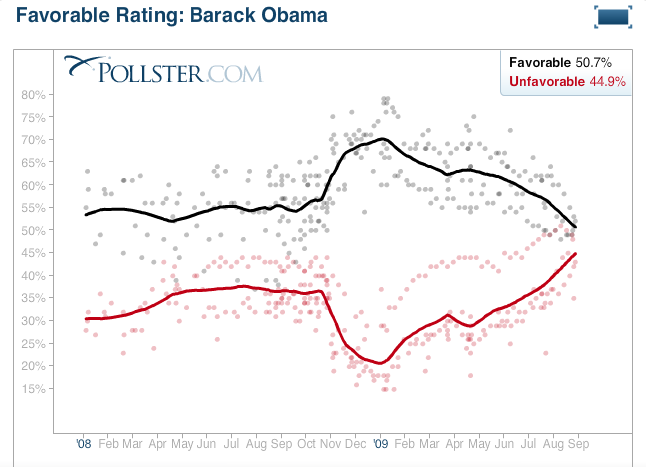 I’ve been wondering what’ll happen when people wake up to the depth of the con. Now I know. Nothing will happen. Waking up isn’t part of the plan. If they have to stop dreaming, they’ll just start hallucinating.

Look at those two converging lines.

That loss of rosy faith is not based on the fact that he’s broken every campaign promise he’s made, starting with not ending the war, the torture, the surveillance, the imperial Presidency, going on with not even trying to deliver on health care for all, and continuing through an endless list.

The pollsters say the loss comes from him being a Muslim Kenyan Socialist Nazi gun-hating terrorist-loving radical leftie.

Christ on a bike in a pancake hat.

A man who spent decades going to the most politically connected church in Chicago is not a Muslim. (Original article taken down from Chicago Tribune, May 2008)

A man who’s never since childhood spoken with an aunt, dearly beloved as per his book, an aunt who turns out to be barely scraping by in a Boston housing project, such a man knows less about the Kenyan concept of family than I do, to say nothing of actually having anything Kenyan about him.

A man who throws about a trillion taxpayer dollars (a trillion for God’s sake) at Wall Street without even trying to stop it from being used to pay obscene bonuses is not a socialist. (There was a feeble attempt after it hit the news, but the attempt was so weak, it died in the Senate without a word from him.)

A man whose idea of withdrawing from Iraq is to escalate in Afghanistan doesn’t hate guns.

A man whose concept of breakthrough thinking is begging Republicans to approve of his every word is so far from being a radical I’d call him a milquetoast.

But none of this is why people are losing that warm fuzzy feeling about him. It’s not even that they’re put off, at last, by the way he’s conveniently oblivious to vile misogyny, his own and his followers’. Or his arrogant disregard of gays. Or the cynical use of racism to squelch a few more voices.

And judging by the skid marks, these people brake for hallucinations.