This picture hit me. Like a wet fish slapped in my face.

It’s part of a BBC photoessay [1] about the poorest of boys in Nigeria finding something to love in their lives in the game of football (what the US calls soccer).

Nothing wrong with that. Good for them!

But this was the second picture in the series:

What I saw was this: 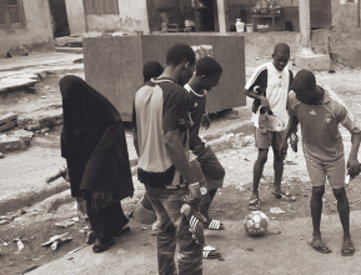 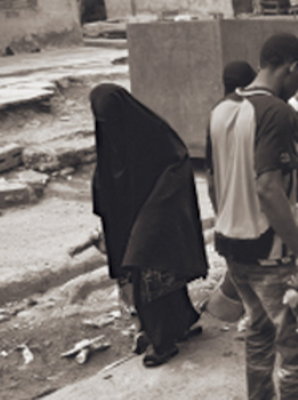 The caption says nothing about the black-shrouded ghost in the picture. She’s closer than a hand’s breadth away from the nearest boys because she’s trying to stay on the dirt road and out of the open sewer that is the gutter. They don’t seem to see her. They don’t give her any space. She doesn’t ask for any. She doesn’t exist.

Nor does the photographer see her. “Ibadan’s youngsters file into teams wearing different jerseys.” (No. Ibadan’s boys file into teams.) “Their goal is simple. … [T]o improve their standard of living and that of their families.” “Akeeb Kareem, chairman of Ibadan’s Sango Community Youth Forum, says the street game is invaluable in keeping the city’s young men constructively occupied.” But the woman, swaddled in black when it’s sweltering, couldn’t play outside even if such an idea occurred to her. Nobody’s worrying about how to make it easier for her to be constructively occupied. She already is, carrying a bag of food home, by the look of it.

Women do nearly three quarters of the work in sub-Saharan Africa [2]. It’s good that the boys are trying to beat poverty. If that’s good, the people already doing 70% of the work to help their families are even more worthy of focus. Helping them in their constructive occupations will lead to even better results. Assuming anyone is interested in results.