Something is happening here, Mr. Jones

First you read about Nome, Alaska. It’s had such tough weather, a Russian tanker and a US Coast Guard icebreaker are painstakingly trying to deliver emergency fuel supplies. 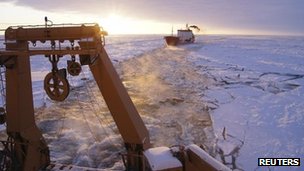 The icebreaker is facing backward because [T]he ice is under so much pressure, it closes up almost as soon as it’s broken. So the ship has to double back and re-break it. [Update: The view is from the icebreaker toward the tanker, which is facing forward. The icebreaker does double back, but that’s not what the picture shows. Sorry for the brain fart.]

You get the picture. Very severe winter in Alaska. They’ve declared a state of emergency and called out the National Guard. That’s in Alaska, where they are anything but pansies about winter. Now, a year or two back, Siberia and China had super-deep winters. Last year, Europe was in a deep freeze and showing up all white on satellite photos.

And then I remembered that the Europeans had connected their deep freeze with climate change. It works like this. As the Arctic sea ice melts, there’s more dark ocean to absorb the sun’s heat and less white ice to reflect it back. The overlying polar winter air is then much colder than the surface. Warm air rises, but the displaced cold polar air has to come down somewhere. And that place is south (and also north, I would guess) of the unnaturally warm zone. (It’s all horribly cold by our standards, but our standards don’t count.) So places like Siberia and Scotland get more snow and cold and the sea freezes thicker and harder. Maybe Alaska is just joining the club.

Isn’t messing with Nature fun? You never know what to expect.