On the Separation of Sex and State

Seriously. It’s time. The whole Republican birth control bullshit (and I do mean bull) has brought the issue to levels of absurdity that require action.

First, notice one thing about the sex issues of the last few decades. They’ve been about birth control (1950s), then abortion (1980s onward), now, God help us, birth control again. Supposedly, it’s all about life, but there are also plenty of outbursts that sex is irresponsible, thoughtless, and no longer “special” when there are no “consequences.”

But sex has always been that way. For men. They’re famous for it, or at least they try to be.

It’s also the only case where a reduction in terror is supposed to usher in the end of civilization as we know it. Antibiotics interfere with God’s will, but nobody complains. Superpower nuclear war is less likely these days, but we don’t get lectures on the lamentable loss of character-building fear.

There has to be a reason why women, specifically, are best terrified.

Terrorized people don’t talk. They do their best to be invisible. So women are silenced, out of the public square, out of public life. And should a few of them forget their place and make a public mark, the Great Forgetting disappears it. Their concerns are unheard, individual, unimportant, personal, private, something for them to deal with on their own, without help.

Which is especially ironic when it concerns something like birth control. If that’s a “women’s issue,” virgin birth must be more common than I realized.

(While I’ve been working on this post, off and on, I see Zunguzungu has made some of the same points. “He is defending his [privilege] for that to be a woman’s problem, one [with] which he … doesn’t need to be concerned.” “[By] making it about her, personally — [he] changes the subject from a generalizable woman’s public concern” to a personal one. “[P]olicing the boundaries … of whose concern gets to be publicly voiced and heard….)

Sara Robinson put it very clearly: control over reproduction brings “a louder and prouder female voice into the running of the world’s affairs at every level, creating new conversations and new priorities.”

But female voices and their new conversations and new priorities and the subsequent unavoidability of acknowledging sex and reproduction and children in public are exactly what people in the patriarchy have been desperate to silence. 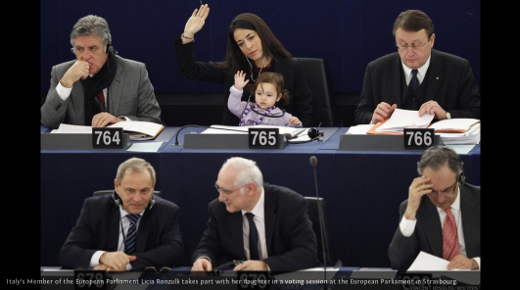 Licia Ronzulli, Italian Member, during a session of the European Parliament.

The goal of the whole blob of sex-related issues, whether they’re called “pro-life” or “personhood” or “traditional values,” is to deny women their rights. It’s never explicit (at least not in the West), but that would be the effect if the legislative or cultural goals were achieved.

That back door approach is essential because equal rights in law have become dogma. Nobody could suggest women should be unable to speak by law. The repressives can only do their best to get women to disappear in fact. The tried and tested method of silencing women is terror, so they’re desperate to go back to the days when women had “consequences.”

Those of us on the other side need to address the real subject, the denial of rights. We need to stop being polite about taking the con job on its own terms. None of this is about “life” or “values.” It’s about denying women their rights.

We have to aim at the real subject every time. When girls are deprived of Plan B because ‘what about the children!?’ it’s tangential that the medical evidence supports its use. The real point is the fundamental right to control your body. When birth control for women is attacked because it enables female sluthood, the real defense is not the specifics of hormonal treatment for polycystic ovarian syndrome. The point is that women’s sex is nobody’s business but their own. When abortion opponents are upset over the loss of “life,” it is irrelevant that there are no cellular markers indicative of personhood or soul. The point is that nobody’s body can be requisitioned against that person’s will. Forced pregnancy is a loss of rights exactly equal to forced kidney donation.

Separation of sex and state makes it simple to see when the state should be involved. Sex, like religion, is a private matter. Same as with religion, when nobody is hurt or coerced or exploited or bamboozled, it’s nobody’s business except the people involved. (The presence of embryos changes nothing, because their status is a matter of personal belief that can guide only personal actions.) On the other hand, if anyone is harmed, then whatever happened is a crime and is neither sex nor religion. It’s very much the state’s business to stop and punish crimes. And the state also has a legitimate function in ensuring children are cared for. But that’s where it ends if the need to separate sex and state is understood. The state does not actually need to tell people how or when to have sex. Really. It doesn’t. People can have sex without any input from the state. It is possible to separate sex and state. It is possible to mind one’s own business.

Separation of sex and state does not mean that people must change their attitudes any more than it does in the parallel case of religion. A Christian can go on being a Christian. They just can’t make anyone else be a Christian. If you’re against gay marriage, you can go on avoiding a same-sex partnership. If you’re anti-abortion, you can avoid having an abortion.

If we want to have actual democracies with equal rights, we have to start insisting on the broad principle that people’s private business is no business of government. There was a time when we’d figured that out for religion, although we seem to be losing the insight now. It was great while it lasted. The holy wars collapsed and boatloads of blood did not get spilled in many places for many years.

If we separated sex and state, we’d get the same massive release of energy for useful purposes as when the holy wars stopped. We’d get the same reduction in casualties, too, when women stopped dying from botched abortions, pregnancy-related suicides, unwanted childbirths, and caring for too many children, and when everybody’s lives improved as population pressures let up. Even children and men would not die as often before their time.

And the separation of sex and state means women can be citizens in fact as well as on paper. That is what is at stake here. If the two are separate, women are citizens. If not, they are for all practical purposes incubators. Never lose sight of that. Anyone who waffles on it, even if they make polite noises while doing it, even if they make polite noises while being President of the United States, is on the side of the Dark Ages and against human rights. No, that is not hyperbole. Not if you understand that women are, in fact, humans.

Sex and state must be separate.