If you’re calm, you have no clue

I can’t stop boggling about an article I just read in the NYTimes. Its gist is that how much we want to spend now to stop climate change depends on how much we think it’ll cost in the future. You guess about that part. And then you get super-precise about which interest rate you’ll accept on it.

Think of it this way: Demanding a 5 percent return means that a dollar invested today should become at least $1.05 next year after inflation, and a little more than $1.10 the year after that. In 200 years it should be worth at least $17,292.58. Turn the logic around and we should spend $1 today to prevent climate-related damage only if it prevents damages of at least $17,292.58 two centuries down the road.

I’m just floored. Sitting here, opening and closing my mouth like a fish out of water.

Are you telling me that people capable of putting on their own socks in the morning honestly think they can figure out all the expected and unexpected consequences of global warming? The costs of the water wars, the costs of cracked foundations due to drought, the costs of new pests, new molds, new diseases, the costs of acid oceans wiping out world fisheries, the cost of runaway feedback loops that dump more and more greenhouse gases into the air no matter what we puny humans do at that point. And that list barely scratches the surface of what will happen on a warming Earth.

But these beaks sit there and think they can make a fine and dandy accounting of the complete unknown? That their only problem is deciding which interest rate to slap on it?

What is wrong with these people? 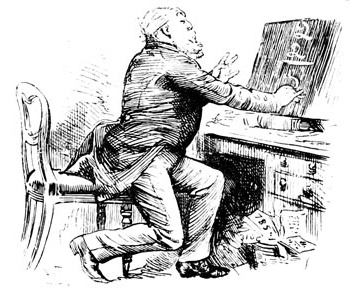