Acid Test
Acid Test
Previous post: « Playing the man card is not about being a man
Next post: Treating Clinton and her opponent equally »
posted in government, politics

Now the clickbait chasers, formerly known as news organizations, are hyperventilating over Supreme Court Justice Ruth Bader Ginsburg daring to point out that The Donald is unfit to be President of these U. S. of A. Omigod should she have done such a thing? Omigod, separation of powers. Omigod, unethical to say anything. And so forth and so on ad nauseam. 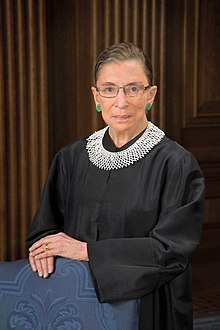 But the Dumpsterfire is a new problem. Some people are a disaster waiting to happen. You do not bring the manners of a courtroom to a disaster. He is so unfit for office, he would be so bad for so many billions of people, that if you don’t point that out you are complicit in his vicious buffoonery.

Ginsburg is well-versed enough in right and wrong to know that. So she says it. As she must.

It’s really the job of the journalists themselves to be shining a light on these things, but they’re too busy inventing scandals for somebody, anybody, to click on.

So everybody else has to step in. Thank god and Ruth that she did. Everybody with a conscience should.