There’s an easy sense that internet violence is just some fantasy. Just cosplaying. Just nothing.

I’ve long thought that was a mistake when it came to the vicious threats thrown at women. That regularly bleeds over into real life.

But I wrote off the radical right wing yammering about destroying the government as stupid fantasists full of cosplay.

That’s the transformative power of not being the target.

Well, these goonies with their GoPros and gear and internet messages asking for the snacks [1] are obviously cosplayers. The part I missed was that doesn’t stop it from bleeding over into reality.

They believed the stuff about this being the beginning of the real war which would put them on top. (evidence: all over Parler)

They had a President telling them to go to it. Jenn Budd [3]:

“Trump ordered his supporters to come to DC on January 6th. They made shirts that said “Civil War January 6, 2021.” Then once there, he spoke in public to them and told them to march on the Capitol.”

They had collaborators inside the Capitol Police (and elsewhere no doubt?). The “Pentagon” (i.e. Trump’s very recently installed Acting Secretary of Defense, Chris Miller) put significant restrictions on D.C. Guard ahead of pro-Trump protests [4].

When help finally came, it was VP Pence who sent it [5], not Trump.

The rioters constructed hangmen’s platforms with rope nooses [6] near the Capitol.

Their fantasy included the execution of the “enemies of the people.” (evidence: all over Parler)

Some of them carried zipties [7] to handcuff people.

It doesn’t take much imagination to see the people, “enemies,” being led off to those newly constructed gallows.

The President who told them to go to it had a tent with video feeds and drinks and food and cronies where they could all watch the progress of the Glorious Victory.

Their grip on reality was so pathetic they couldn’t see that their Klown Kar Koup was never going anywhere. But that changes nothing.

They were hoping for a coup.

It won’t be enough to laugh and move on. They were hoping for a coup. It has to be treated like one. The whole mentality that led to it has to be rooted out. That has to start with evicting Trump from the Presidency now. Yesterday. Anything less shows stupidity about the scope of the disaster.

Otherwise this is our last warning. Next time the Klowns will have more than cosplayers. They’ll have a planner or two.

Update Jan10: Something heartening: Igor Bobic [10] filmed a quick thinking Capitol Police officer, by himself, as he eggs on a mob to chase him (toward his backup…) instead of charging in to the Senate room with Senators still inside.

14 Comments To "The Coup That Was"

I’m wrong. It takes no imagination at all. Lin Wood is Trump’s goddamn actual lawyer. 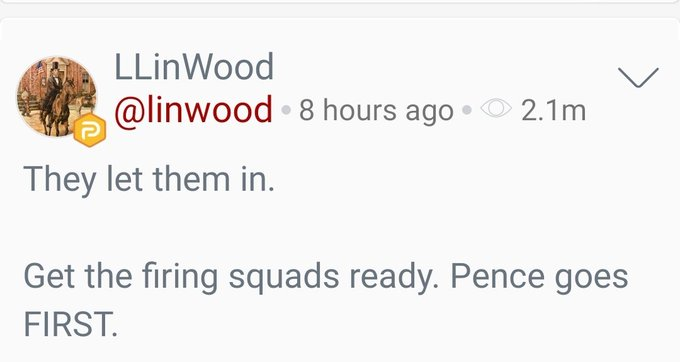 Also this by [12], Intelligence officials warn of what comes next after pro-Trump Capitol riots.

“When Joe Biden is installed as the president, the jig is up because he’s going to have to physically leave the White House,” he said. “And they’re going to realize that all of the smoke and mirrors he’s been basically attempting to deceive people with over these past couple of months [were] all a hoax.”

Thank you, Quixote, for providing this forum.

Out of all the not normal things that have come out this week, I keep tripping over this one fact.

Ashli Babbit, who was shot and killed while trying to break into a chamber where this country’s lawmakers were sitting in normal civilian dress (heels optional. sleeves required), had been trained by this same country to kill people. That was her job.

She had gone on several deployments. That meant she was good at her job.

When she broke that window, she was no more than this.

It’s hard without a community to say what I want to about this, but I think it amounts to: no matter what your phenotype is, no matter how America slots you, you are what you are.

When Congress without, as far as i remember, one single person of my sex, voted to exclude me from the draft in the early 70’s, I wrote many a letter and pounded many a table in outrage.

My favorite brother had just returned from Vietnam (later to roll over on my younger brothers as the Republican he became, when approving the draft reinstatement).

I was still livid that my government had put his life in danger for no reason, but also determined that no accident of birth would put me outside his rights and responsibilities. I was willing to endure conscientious objector penalties, as any man of my age had to if refusing to be drafted.

Women don’t seem to realize that with all the glories of being an adult, all the penalties go too. Adulthood doesn’t happen without that.

This woman may or may not have thought of that. The news coverage seems to be missing it,

That she was a trained soldier, breaking into our government, while it was in session.

That’s what she was.

Not a wife, not a mother, not anyone’s sister or coworker.

Someone whose job had been to kill people and whose multiple deployments had shown she was good at her job. That’s how the police had to respond, whether or not they knew this at the time.

News coverage seems to be leaving out this salient fact.

I got stuck, due to this state’s “law, what law?” violation of LIHTC statutes, in the tRumpiest of tRumpy Oregon counties. Right next to your cited bird bangers.

To quote Wodehouse,
“That is them all over, Mabel”

leave out that “will”, willya?

Very grateful for the preview for comments, but can we also have a “postview”???

Yes, poor Babbitt sounds like so many of the people who fell down the QAnon hole. Normal, until they buy into some weird mythology that sends them off on a killing crusade.

I think about the Rwandan genocide and how quick it was for people to start slaughtering their neighbors for being some kind of bad. They’d been talked at by talk radio for several years prior to that. It can happen almost-in-a-heartbeat. By letting the likes of QAnon & Limbaugh & and even you-have-mayo-on-your-chin-Tucker-Carlson spout off, now there’s the same hypnosis going on in the US.

Meanwhile all the Repubs can do is stroke their chins about not being overhasty. (Subtext: “Ooh, ooh, maybe there’s still some way to hang on to power.”)

The Republic is definitely in intensive care, although maybe off life support?

And, yes, the nauseating sexism of the coverage can never stop, even for a minute.

It’s that great moment caught by Igor Bobic of the black officer who taunts the mob into following him away from vulnerable senators. It takes real heroism to draw a mob down on yourself to help others. Nice to see that amidst all the craven cowardice of parasitic Repubs.

Thanks for the correction, Quixote. And for the video.

There are also those trained to witness, deal with and use violence themselves, who are not consumed by it or numb to it. This brave man was one of those.

I did not know hate radio was one of the factors in the Rwandan genocide. That would have been pouring even more gasoline on the colonial legacy of “othering” between those two groups.

I think without some way to correct, offset or otherwise nullify propaganda on radio, television, and social media in this country, the same kind of “othering” will continue to be used to keep a small racial and sexual minority in power. Who just happen to be of the same demographic as the owners of those media.

Othering is as old as humanity, unfortunately. The word for themselves in every (?) pre-literate language is some variant of The People. Outsiders … aren’t. It wasn’t invented by colonizers. They just had so much power (mainly in the form of guns) they could abuse the mindset worse than most.

Anyway, totally tangential. You’re right that if we don’t find some way to neutralize propaganda, we’re done for.

This is very much in line with your post. Factual, and quite damning:

It’s Bill Moyers’ news site (I know, I know, the possesive is probably “Moyers’s” – it just sounds too weird). Steven Harper is the author. I trust Moyers for non-sexist news more than any other male liberal journalist.

The thought keeps coming back over and over again: Who is pulling Trump’s strings? Everything he’s done to inflict lasting damage on America and American citizens, especially over the last year, has been way too effective, too well coordinated, too well thought out for that buffoon. Unless he really *is* someone like Doofus from “Scary Movie”.

I think Trump is fully on board with anything that promises him a Jabba the Hutt position. I agree that he’s too dumb (? lazy? both) to come up with a strategy beyond, “Bang! Pow!” all by himself.

There’s Jared, who’s also dumber than a box of rocks, but he doesn’t seem to know it. None of his schemes ever work (Mideast peace…, pandemic…, way back when: opioid deaths…, etc.) To my mind, that makes him the probable candidate for “planning” the coup.

There’s also Stephen Miller. Bannon. I’d include Manafort and Stone, but a lot of communication with those two would probably be noticed.

Who knows. Maybe if Congress investigates properly, we’ll find out.

Bit late, as usual, I did write about the Inauguration 😀 . After trying to move your comment last time, I’m not going to try again. But if you’d like to copy and paste, go ahead. (I can then delete the one here, if you want.)

It really was a well done ceremony. All kinds of inspiring and uplifting parts. And sad, but good, to see the awful toll of covid recognized.

(Oh, and PS to who helped the Dump: not Putin, is my guess. The Klown Kar Koup did not have one single mark of professionalism. If Putin was involved, it’s obviously time for him to retire from the dictator business!)

Will do, Q! I’ll do a bit of editing first, though.

I also want to note, for the insurrection time line report link:

The early November purges at Dept. of Defense allowed the traitor in chief’s subsequently installed men to block the requests and warnings of the legitimate officials in the time leading up to and during the riots on January 6th.

The puppet’s puppets’ delays and blocking of calls for help by DC Police Chief Steven Sund and DC Mayor Muriel Bowser are especially shocking when set so clearly against the events of the riot happening at the same time.

Especially this near the end:
“The Defense Department’s notification of approval to Bowser came two hours after her request.”

Almost the end of the riot and -after- Pence and the Senate had been evacuated and the House was sheltering in place. While the DOD puppets were -still- blocking Northram’s and Hogan’s authorizations to send their states’ Guard troops. They finally gave that necessary approval an hour later.

And now this thing with the DOJ the fluffers at the NYT have just decided to let people know about. Same kind of thing.

I’m sure you’re right about Putin; he would have ordered himself thrown out of a window if the riot had been his baby. But the timing is too finely orchestrated and far too suble for the buffoon in chief. There’s just too much ‘there’ there.