(I know. It’s not Friday. See bottom of sidebar….) 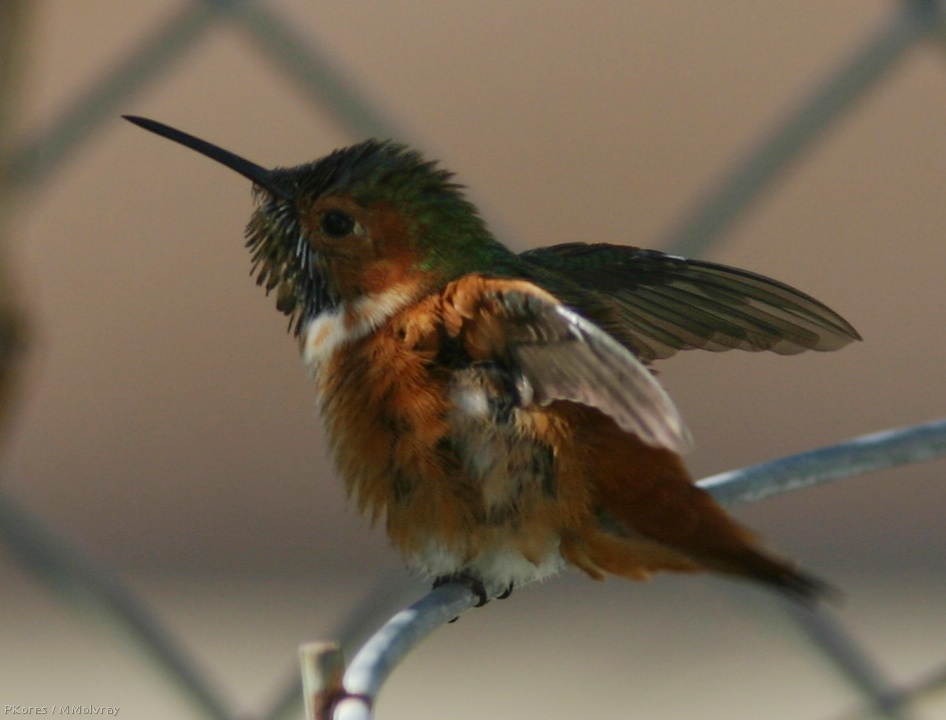 An Allen’s hummingbird, stretching after a nap.

So says MSNBC in a breathless article on terrorists swarming in South America.

Iranian-backed Hezbollah militia has taken root in South America, fostering a well-financed force of Islamist radicals boiling with hatred for the United States …
From its Western base in a remote region divided by the borders of Paraguay, Brazil and Argentina known as the Tri-border, … Hezbollah has mined the frustrations of many Muslims

Oh, no. Not frustrated Muslims! Anything but that! Over here? Not over there, where they can be safely bombed in a completely unterrorist way? Say it ain’t so!

Really? Then how come I’ve heard about this hotspot for years? I don’t even remember where I first heard about it (Juan Cole’s blog, Informed Comment?), but it’s nice to know that NBC is capable, given enough time, of finding its backside with both hands.

U.S. officials fear that poorly patrolled borders and rampant corruption in the Tri-border region could make it easy for Hezbollah terrorists to infiltrate the southern U.S. border. …[I]t is easy for potential terrorists, without detection, to book passage to the United States through Brazil and then Mexico simply by posing as tourists.

Wow. Brazil has a border with Mexico? I never knew that. Scary. Wooooo. Oh, wait, if they’re going by land, they’d have to cross, Venezuela, Colombia, Panama, Costa Rica, Nicaragua, El Salvador, Guatemala, and then they’d reach Mexico. If they fly, they could — this is even worse, but we have to face facts — they could fly straight from Brazil to the You-nited States!

It is surprisingly easy to move across borders in the Triple Frontier …. A smuggler can bike from Paraguay into Brazil and return without ever being asked for a passport

And by the time he’s finished pedaling the whole Pan-American highway, he’s a solid mass of muscle and completely unstoppable.

Rep. Silvestre Reyes, D-Texas, chairman of the House Intelligence Committee, said Hezbollah militiamen would raise no suspicions because they have Latin American passports, speak Spanish and look like Hispanic tourists.

Someone, quick, get me a field guide to the Hispanic Tourist! I mean, what if I missed one because he looked like Javier Perez de Cuellar?

“People … have planned terrorist attacks from [the Tri-border],” said Luttwak, who has been a terrorism consultant to the CIA and the National Security Council. … “Our experience is that if you see one roach, there are a lot more,” said Frank Urbancic, principal deputy director of the State Department’s counterterrorism office

At this point, I’d had it. If you want to find out what the rest of the article says, you’ll have to read it for yourself. I quit there. In the unforgettable words of Barbara Bush, I don’t want to pollute my beautiful mind.

Iraq must prove viability by being nonviable

It’s becoming very clear that Iraq’s Oil Law is a give-away to Big Anglo Oil. No surprise there. What’s getting less attention is the so-called benchmarks being discussed in the US Congress. These are supposed to be the end of the free ride Congress has been giving Bush. They’re supposed to show that Iraq is actually accomplishing something with all that US aid that the Americans are firmly convinced they are giving Iraq.

Proof that the Iraqi government is finally getting a grip is that they actually get down to legislative business.

The first (and only?) legislative business they are to take care of is passage of the Oil Law. That’s the benchmark.

But the Oil Law gives away Iraq’s oil wealth and dooms it to being a poor debtor nation for as long as the Paris Club can keep it there. Judging by actions rather than words, grabbing the oil has been Cheney-Bush’s priority from the start. Now it also seems to be the priority of the (supposed) opposition Democrats in Congress.

At least on this issue, the whole pretense at opposition and vetoes is just so much theatre.

I’ve bumped into a few articles reminiscing about how innocent life was prior to September 11, 2001. (Just the most recent example. There are others. Greg Mitchell, Editor & Publisher [link broken, 2014-01-25] [same gist e.g. here].)

I find them distasteful. No, it’s more than that. I find them offensive. Deeply offensive. Because what are they saying? That prior to 9/11/2001 we all lived in Eden?

I don’t think so. There were wrongful deaths before 9/11. Hundreds died in Kenya when the exact same group bombed the US embassy there. Thousands —hundreds of thousands— die, or worse, every day in violence committed against unarmed civilians. The purpose of the violence is to terrorize people into submission. The situation is exactly parallel, although the property damage is usually less when governments aren’t involved.

The only difference I can see is that the dead are not white, middle class US citizens.

Nobody should kill white, middle class US citizens. Neither should anyone kill anyone else.

Anyone who says everything was different before 9/11 is saying that all those other deaths, all the millions of them, mean nothing. All the hideous, infinite suffering of rape or amputated hands was irrelevant, is irrelevant, doesn’t matter.

What kind of a hollowed-out soul do you have, if you feel so little for your fellow human beings?

You are currently browsing the Acid Test by Quixote weblog archives for May, 2007.