Look, I don’t want to be depressing, but …

Via the BBC, I noticed this article in Nature Geoscience by Zeebe & Caldeira.

They’ve absolutely nailed down a carbon cycle some mouthbreathers were hoping didn’t explain much. Volcanoes spew vast quantities of greenhouse gases into the air, so their thinking — the mouthbreathers’ thinking, not the volcanoes — was that greenhouse gases are natural and couldn’t possibly be a problem. Mother Nature would take care of everything. Thus it ever was. Thus it ever shall be. (No, I’m not being fair to the scientists, as opposed to the politicians, who held the contrarian point of view. It’s way more complicated than that. But it’s still just as wrong.)

The evidence pointed toward a cycle in which the atmospheric carbon is eventually fixated into rocks. Corals, for instance, fix CO2 when they form calcium carbonate which makes limestone. Sedimentary rocks trap carbonates as they pile up. (That’s what the BBC means when they write that carbon is “removed from the air by rock weathering,” which, as written, doesn’t make any sense.) Then, by the processes of tectonic movement, the rock containing all that carbon moves toward subduction zones and is eventually forced down under the crust. The volatiles in those rocks, including some containing carbon, rise and force their way up through the volcanoes that run with the subduction zones.

If you’re sitting there thinking, “But, my God, that’s got to take nonillions of years!” that’s exactly the point. It takes over a hundred million years for the whole cycle, and during all that time the carbon is not in the atmosphere and not greenhousing.

So far, so good. We’ve known about this (well, some of us have known about this) for decades. The shocking thing to me about their research was the data on how much long term variation in atmospheric carbon there has been. This is data from ice cores. This is not a guess, or a pessimistic estimate, or a liberal fantasy to make the Republicans look bad. This is data.

The mean long term variation in atmospheric carbon has been 22 parts per million. Individual measurements have varied more than that, but overall, for the last 610,000 years, that’s been the variation.

Except for the last 200 years. We’ve already upped the concentration by 100 ppm. We’re going to increase it by another couple of hundred before we have any chance of stopping it. The big argument is whether we need to bother stopping it then, or whether another few hundred on top of that will really make any difference. Why ding the GDP a percentage point or two when there’s no need?

Twenty two parts per million has been the extent of the real variation for longer than modern humans have existed. But some of us can’t figure out that shoveling on way, way more than that will have any impact.

Print This Post
posted in gender, politics, Thinking out loud 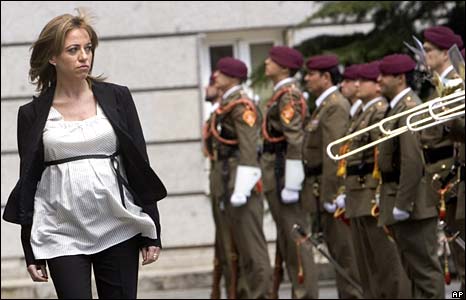 That’s all. Just thought you might want to know.

Your Blogscientist is depressed. It may be necessary to take what I say with some salt, or sugar, or something. What brought this on is a longish article I read on zfacts.com, Peak Oil or Liquid Coal?

I was always under the general impression that oil ruled because, with all the subsidies it gets, it’s the cheapest and most convenient fuel around. Numbers periodically floated out saying that solar would be competitive at $70 per barrel oil, or $100, or some astronomical sum. Well, we’re there. Any day now, I figured, people would wake up from their mass hypnosis and realize that everybody except Big Oil wins when we start moving to solar and conservation.

Then I saw this on zfacts:

[Coal gasification] could produce gasoline for the equivalent of about $55 per barrel of oil. This has not yet happened because investors are afraid the price of oil will fall back below $55 as soon as they build a coal-to-gasoline plant.

Fifty-five dollars? Sure, that means current subsidies have to stay in place, but how much do you want to bet they will if it gives people a chance at $55 barrel oil? Also, Big Oil wins, which is way more important than everybody winning.

So now I’m convinced that too many people will race to hell down a path made of coal gas. They’ll do it as soon as the reality of peak oil penetrates through their ivory skulls and into that air space they use for brains. Once coal-to-gas infrastructure starts being built, we’ll have another whole wall of vested interests blocking off a real solution. And who cares if the planet fries? That’s tomorrow. … Until it’s today. And then we’ll have disasters to worry about. Namby-pamby hippy stuff like solar energy won’t even be on the map.

When has a crowd of people ever done anything different when they could do the same old thing at the same–or less–cost?

So I say we’re doomed.

You are currently browsing the Acid Test by Quixote weblog archives for April, 2008.