The statistics show that there was unfunny business in recent elections. They show it far past scientific levels of certainty. The statistical likelihood of fraud (“nonrandom events” in statspeak) is billions to one. (Links to the original research here.) But what keeps too many of us looking the other way — we’re not some backward Berzerki republic, for God’s sake! — is that not enough culprits have been nabbed in the act.

Well, the plot thickens. From The Raw Story

The first red flag went up when the computer patch was installed in person by Diebold CEO Bob Urosevich, who flew in from Texas and applied it in just two counties, DeKalb and Fulton, both Democratic strongholds. . . .

The whistleblower said another flag went up when it became apparent that the patch installed by Urosevich had failed to fix a problem with the computer clock, which employees from Diebold and the Georgia Secretary of State’s office had been told the patch was designed specifically to address.

Some critics of electronic voting raised questions about the 2002 Georgia race even at the time. Incumbent Democratic Sen. Max Cleland, who was five percentage points ahead of Republican challenger Saxby Chambliss in polls taken a week before the vote, lost 53% to 46%. Incumbent Democratic Governor Roy Barnes, who led challenger Sonny Perdue in the polls by eleven points, lost 51% to 46%. However, because the Diebold machines used throughout the state provided no paper trail, it was impossible to ask for a recount in either case. . . .

[The security expert] took the evidence to the Cyber-Security Division of the Department of Justice and reported the series of events to authorities. The Justice Department has not yet acted on his report.

As Alice said, “Curiouser and curiouser.”

I was at the Santa Barbara Orchid Fair last weekend. (It’s a tough job, but somebody’s got to do it.) One of the huge growers there, SB Orchid Estates does an open house at the same time. This striking species caught my eye: 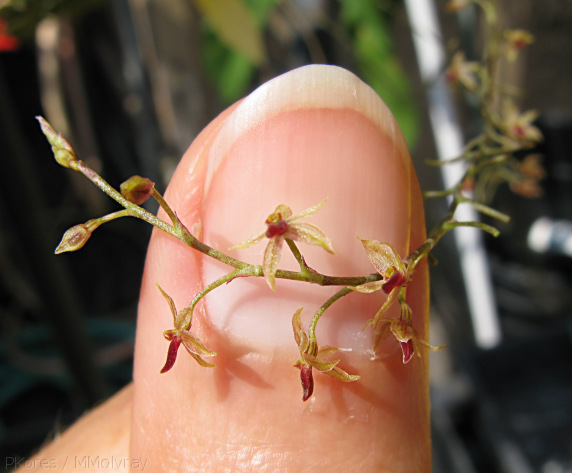 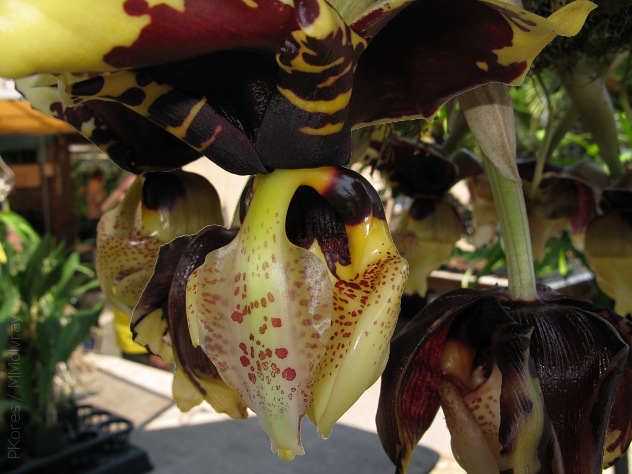 The Central and South American Stanhopea and Catasetum orchids produce what amounts to perfume used by male euglossine bees to communicate with female euglossine bees. Everybody wins. The orchids get highly specific pollinators who find them from, literally, miles away. And they get that at very little cost in terms of the energy it takes to produce a few pheromones. The male bees don’t have to make their own. And the females get attractive males.

The euglossines are on the spectacular side themselves: 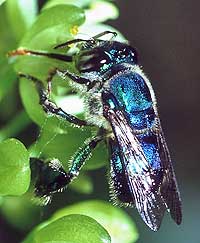 A Blast from the Past

I have birds. I use newspapers to line the bird cages. However, I haven’t bought a newspaper since November of 2004. It’s too depressing. So I’m getting to the bottom of the stack that was going to be recycled when I realized I better save it. Who knew when the world would be in a fit condition to provide not-sick-making bird cage liners?

So I bumped into these mortgage ads from my corner of Southern California in the heady days of 2003 . . . 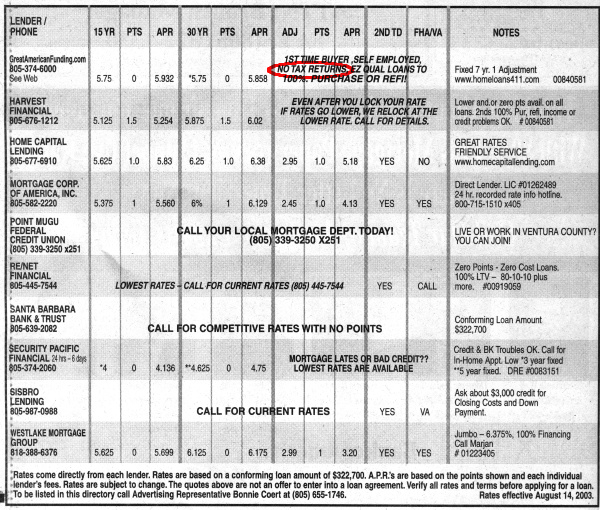 The circled “No Tax Return” promises that this lender won’t want to see any real evidence of income. It translates to, “Please come and lie to us so that we can get loan origination fees off you! Puhleeeze!”

This wasn’t unusual. Au contraire. A couple more ads from the same page of Aug. 17, 2003 classified ads in the Real Estate section of the Ventura County Star: 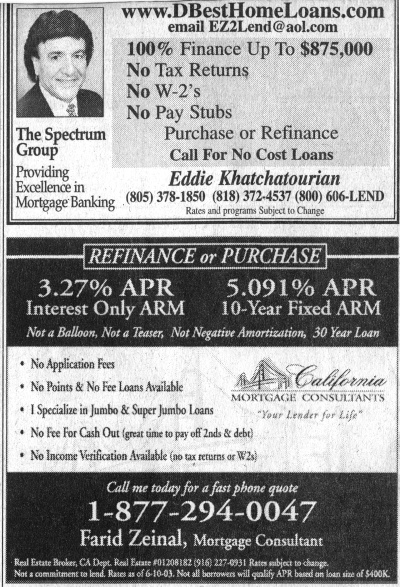 This time it really is a Friday, but the picture isn’t a photo, no matter how much it looks like one. It’s one of Kees Veenenbos’s amazing renderings of other worlds based on the available data from space flights. His work has appeared in National Geographic (print edition ). Go to Veenenbos’s site and lose yourself.

To give you an idea of what you’ll be missing if you don’t go, here’s a picture of Jupiter’s icy moon, Europa, based on data from the Voyager Imaging Team. [Update, 2009-09-27: not currently posted on that site.] 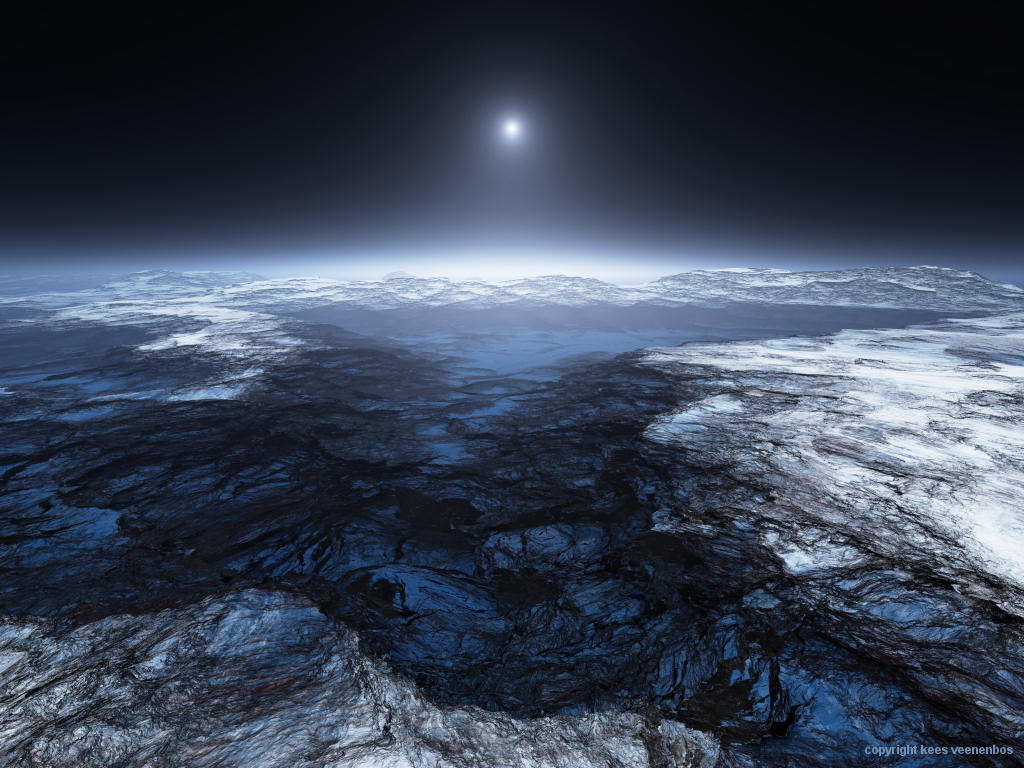 I think this should be a motivational poster. You know, the kind with captions like “Determination,” and “Perseverance,” and “Achieve Your Goals.” This one should be: “Energy Conservation.” 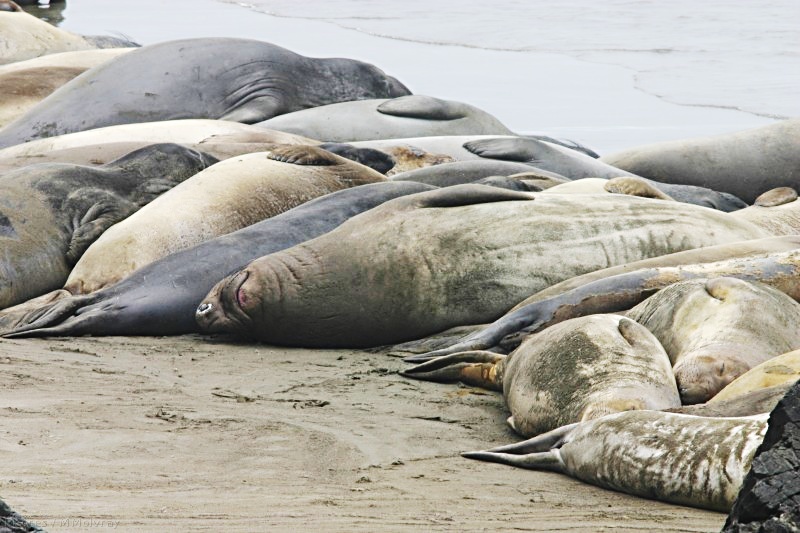 The elephant seals are working hard, regenerating all-new skin. It’s called a catastrophic molt and it takes several weeks. When molting, they’re too susceptible to the cold to go into the water, so they don’t feed or drink during those weeks. They spend the whole time conserving energy. (More info at Wikipedia.) The photo was taken at–logically enough–Seal Beach on California’s Central Coast.

Photovoltaics do take energy to make and use toxic elements that can cause nasty pollution unless they’re contained. We knew that. But what I didn’t really bother to think about is that those same rare elements that are toxic are also, well, rare. We’re using them like they’re not rare. So . . . doh! . . . they’ll run out soon. Meaning soon. Times like “five years” and “2017” come out of the number-crunchers.

It’s not just the world’s platinum that is being used up at an alarming rate. The same goes for many other rare metals such as indium, which is being consumed in unprecedented quantities for making LCDs for flat-screen TVs, and the tantalum needed to make compact electronic devices like cellphones. . . . Even reserves of such commonplace elements as zinc, copper, nickel . . . will run out in the not-too-distant future. . . . [T]he metal gallium, which along with indium is used to make indium gallium arsenide . . . is the semiconducting material at the heart of a new generation of solar cells . . . . Reserves of both metals are disputed, but . . . René Kleijn, a chemist at Leiden University in the Netherlands, . . . estimates gallium and indium will probably contribute to less than 1 per cent of all future solar cells – a limitation imposed purely by a lack of raw material.

Iridium is the material that blankets the planet in a thin layer, left over from the asteroid strike that bothered the dinosaurs. Some of the other elements are found in sand in nano-quantities. However, grinding up the whole planet to make solar panels doesn’t seem like a much better idea than turning it inside out to burn it.

Time to get extremely serious about organic (in the sense of carbon-based) photovoltaics. It’s complicated, though. To begin with, organic molecules break down easily. And then, as Terry Pratchett might say, it’s quantum. However, plants do it. Bacteria do it. You’re not going to tell me we’re stupider than plants, are you? (Don’t answer that.)

You are currently browsing the Acid Test by Quixote weblog archives for July, 2008.