BBC, as usual, has the shot. Quintessential California just now: 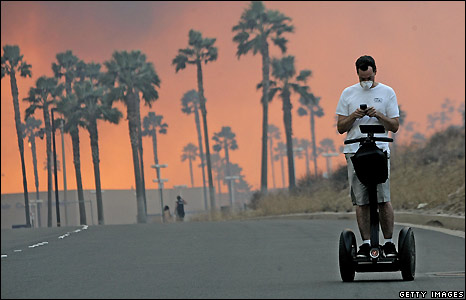 Evolution does not equal a feedback loop

A group of Princeton chemists, publishing in Physical Review Letters (which, as you might guess from the name, is not a biological research journal), feel they’ve found a mechanism that shows proteins direct their own evolution based on environmental conditions. Or something like that.

Evolution’s new wrinkle: Proteins with cruise control provide new perspective
A team of Princeton University scientists has discovered that chains of proteins found in most living organisms act like adaptive machines, possessing the ability to control their own evolution.

The quote is from the press release, there’s no citation to the actual article, but, Google being my friend, the abstract wasn’t hard to find. END_OF_DOCUMENT_TOKEN_TO_BE_REPLACED

Ask not for whom the bell tolls

Well, the US has done it again. Elected an arrogant empty bigoted suit. It didn’t work out for us so well last time. At least this one is smarter. Although that may not be a good thing.

I don’t know what’s happened to the rumor about Krugman and Volcker being in the Cabinet. (Mentioned in my comment to the previous post about “Vote present.”) Now the talk is of Larry Summers. An economist, who obviously flunked any basic bio he might ever have had, who said the following:

Except what he really said was “women” instead of “Latinos.” Astonishingly enough, that didn’t make it all right, probably because he had the misfortune to be in that hyper-radical country called Cambridge, Massachusetts. He had to resign his Presidency of Harvard over it. But that’s okay if BO gives him an even huger stage for his bigoted ideas. He’s always made a point of saying he’ll surround himself with good people. Good for what, I’m not sure.

And then there’s Prop. 8 here in California. (Background: the California judiciary recently said it was unconstitutional discrimination to stop same-sex marriages. That led to a ballot initiative so that people could vote to make it illegal again.) It passed, about 52% to 48%. The scuttlebutt has it that what pushed it over the top was new and homophobic Obama voters. The Big 0 himself came out saying marriage was between a man and a woman, a sound bite much used by the vote-yes-on-8 crowd. I’m ignoring the news so I have no idea how this is striking other people, but it breaks my heart. I don’t know why it breaks it so much more when presumed progressives are jerks than when conservatives are, but it does.

And so it goes. He’s already used racism just to score cheap political points. Age-ism is fine, too. So, whoever you are, don’t worry, you won’t be left out.  You’ll be paying for this guy’s election unless you’re one of the few from whom he needs something.

Is there any hope? Well, with the economy in the tank, job one is going to be getting that kickstarted. There are two ways to do that. More war, or huge public works projects. I’d say the US is tapped out on the war thing, but you never know. BO talks feelingly of escalating in Afghanistan. However, there is one blindingly obvious public work that has to be done: realigning energy infrastructure away from oil. His ideas are to speed up global warming with coal gasification and to compensate for that by poisoning the planet with nukes. But solar and wind are becoming cheaper so fast that events may overtake his desire to help his paymasters at Exelon. If the current disasters actually push the next Administration into shifting the country toward sustainable energy, it will be worth the awful price. The price only goes up, and if you think it’s expensive to switch now, come back in 10, 20, 30 years.

As for foreign policy, well, it’s hard to see how anyone could be worse than the Shrub-Cheney combo. I’m sure it’s possible, but it is hard. And BO has actually been outside the US. And he’s not stupid. But the only thing he cares about is himself. I shall watch our future progress on this one planet of ours with considerable interest.

(I’m too depressed to look for links. Search for “obama” on this blog, and you’ll find all the references. None of this is new.)

You are currently browsing the Acid Test by Quixote weblog archives for November, 2008.