Everything wrong summarized in one picture 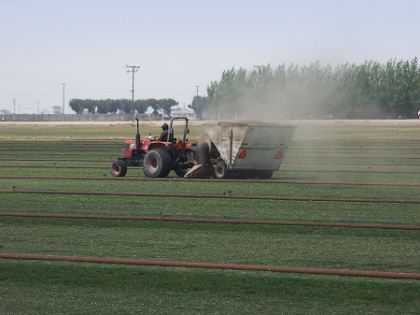 A sod farm grows lawns for people who can’t be bothered with the whole grass-seed-and-careful-watering effort. It takes tons of fossil fuel. It takes huge quantities of water. You see farmworkers carefully moving the irrigation pipes every few days so that none of the sod gets marred by having a pipe on it too long.

You also see farmworkers walking the fields in formation, plastic bags on their belts, gently using a screwdriver-like tool to remove any weed trying to invade the living astroturf.

And, of course, the new grass has to be cut regularly for the sod to form a nice even carpet. More fossil fuel. Also, grass clippings. The clippings can’t be allowed to matt down. So they are vacuumed up.

We’re living in a world where it’s worth building huge wells drilling thousands of meters down to bring up ancient decomposed bacteria that are refined in enormous factories and then trucked everywhere while releasing their carbon to cook the planet so that fuel can be put into tractors to vacuum grass clippings.

The Lysistrata option bothers me

Women either want sex or they don’t. They’re either equal partners in desire — and biology says they very much are — or they aren’t.

If they want sex, if it’s a desire and not a fungible commodity, then women would no more withhold sex to get something they want than men would.

If, for men, sex is something more than a compulsory sneeze, then withholding sex wouldn’t have much effect on them in any case.

Could we all stop buying into that?

It is not some kind of empowerfulling for women (or men) to see how much they can get in the market for sex. It’s stupid.

I don’t mean McQueary. I mean everybody who makes this necessary:

Man who testified against Sandusky leaving courthouse with a black bag covering his head.

And also everybody who makes this necessary: Sandusky trial sketch artists offer a blurred view of accusers.

The people who can’t show their faces have withstood wrongs and are even fighting against them. That’s the definition of heroism. Why would they want to hide? They should have nothing to expect but admiration and praise, right?

(By the way, that image has been pulled from the web, as far as I can tell. Only the thumbnail is left. Everywhere, it’s been replaced with pictures of Sandusky’s smiling mug. What does it say when shame about the shame is so strong we’re ashamed even to see it?)

There is something wrong here, and it’s not Sandusky, vomit-worthy as he is.

It’s bystanders who provide the air for predators.

In my world, those millions aren’t bigger criminals than the perp. But just being anonymous doesn’t make them that much smaller either.

There are many articles out and about just now, wondering how predators keep escaping notice when we ought to have learned by now. How many powerful pedophiles does it take? How many celebrity athlete rapists? How many executive sharks?

It’s pretty obvious, I think. As many as it takes for bystanders to leave their safe anonymity, to suffer the embarrassment of calling out the high or mighty, and to stop committing the crime of going along.

You are currently browsing the Acid Test by Quixote weblog archives for June, 2012.