Congressmen should have at least room temperature IQ

Now I’ve heard everything. I know. This is an Idaho state rep. But it doesn’t matter. He’s not fit to empty bedpans, let alone make decisions that will wind up killing women.

This nincompoopery happened during hearings about an anti-abortion bill.

An Idaho lawmaker received a brief lesson on female anatomy after asking if a woman can swallow a small camera for doctors to conduct a remote gynecological exam.

I mean, ‘s obvious, right? Unlike men, who are known to have stomachs and lungs and hearts somewhere in their bodies, women are just bags for incubating fetuses. No doubt he’s also convinced they can get pregnant from oral sex.

Could we please have qualification exams for Congressmen? You know, they have to be able to spell their own names, know which end is their ass, stuff like that.

I haven’t commented on the murders of freethinkers at Charlie Hebdo or in Copenhagen because I’m too angry. Goons want to send us all back to the Dark Ages. We mustn’t let them. That’s beyond self-evident. Human rights, basic freedoms, secular governments, obliviousness to blasphemy rules, these are all essential to peaceful societies where everyone’s rights are equally respected.

I do realize that free speech which gives offense is a complicated subject. It is said to justify harassing women into silence, soaking a crucifix in urine and calling it art, or drawing Mohammed to comment on the methods of violent loonies who call themselves Muslims.

Do I think it justifies these things? In the order given, no, yes, and yes. I’ll do a second interminable post on it some day explaining exactly why simply because I feel compelled.

But, really, there’s no need. It’s all been laid out by Evolving Perspectives in one cartoon. (I took the liberty of translating the French back to English. Click on the image or the link to the source for a full size version.) 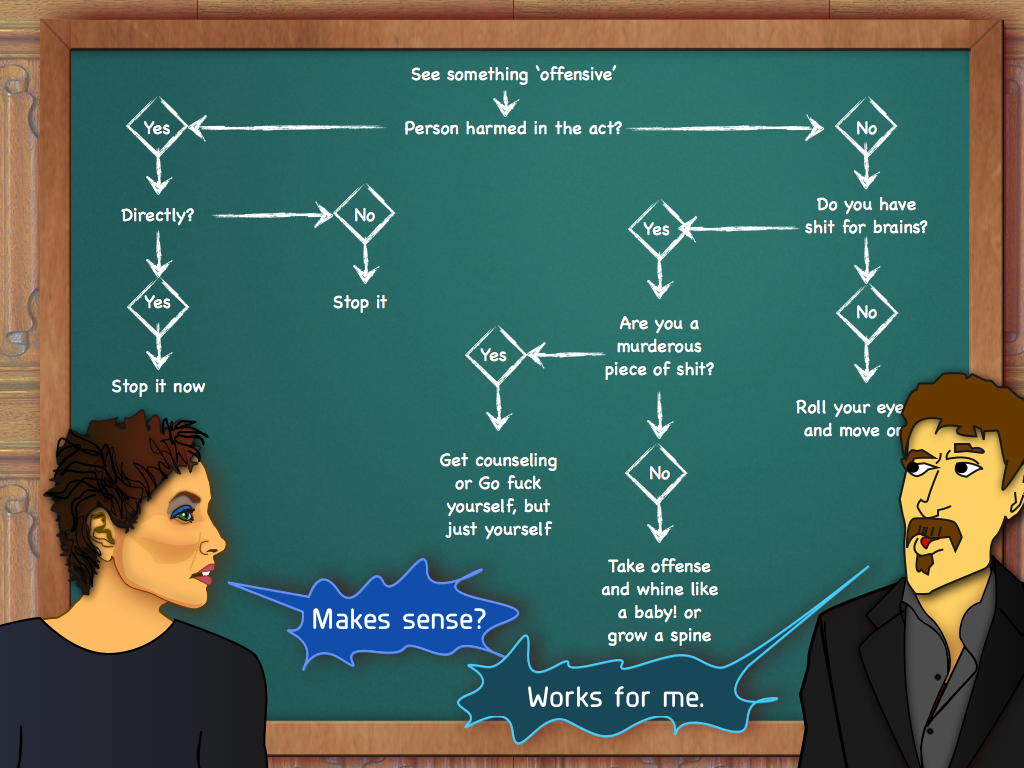 What to do about offense: a flowchart. (Note the first fork: Is anyone harmed?)
(Evolving Perspectives)

Print This Post
posted in gender, Thinking out loud

In an article about a scientific study of effective screen names for online dating sites, this minor point:

And would-be daters should take gender into consideration: men are more drawn to names that indicate physical attractiveness, such as ‘Blondie’ or ‘Cutie’ while women go for names that signal intelligence, such as ‘Cultured.’

Now, humans obviously think humans are very beautiful, but honestly in competition with something like this: 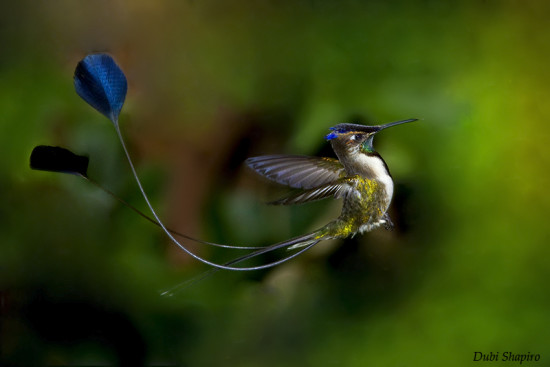 On the other hand, the thing we’re most impressed with about ourselves is this: 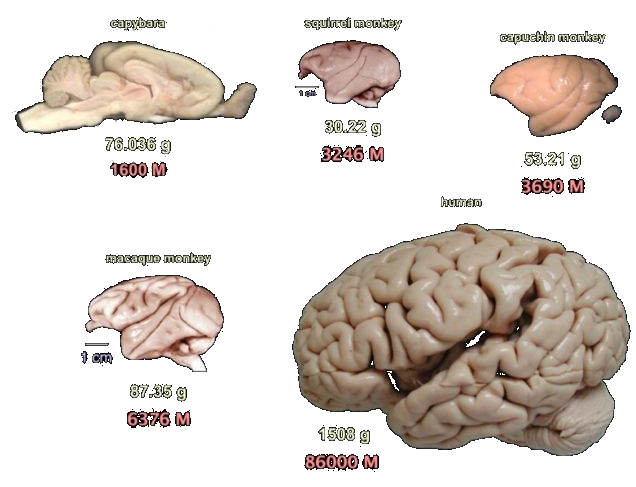 The inescapable conclusion is that the big decisions must be left to women if humans want to continue evolving intelligently. (That, or sexism hasn’t done men’s brains any good.)

There is no controversy about vaccines. They work. The diseases they prevent are horrible. The vaccines themselves are about as harmless as it’s possible to be and still exist in the real world. For instance, Diphtheria-tetanus-pertussis, DTaP: fewer than one person in one million has serious complications. “Serious” means any reaction that requires medical attention, even if it’s temporary, such as high fever or a bad allergic reaction. Measles-mumps-rubella, MMR: fewer than one in one million with serious complications; inactivated polio, IPV: even fewer than the previous; shingles: none reported yet so “being monitored.” (Source: CDC)

As for the generated “controversy” about vaccines, it deserves as much attention as people who plan to fly by flapping their arms. It is nonsense. Yes, science and medicine have both been wrong about some very important things in the past, and they will be again. Vaccination is not one of them. The evidence in favor of it is beyond overwhelming. End of story. That is, it’s the end of the scientific and medical story.

Politically, it’s not the end of the story because there’s no law saying we always have to be rational. If I want to jump off a roof while flapping my arms and kill myself, I can do that.

But not vaccinating differs from the personal choice to be an idiot in one very important respect: it’s not just personal. It can take other people down with it. And there are laws against that.

Before the current measles outbreak, the comments on news sites would have fit comfortably into this Onion article. Now that there is an outbreak because so many people avoided vaccination, or had it avoided for them if they’re children, people feel vulnerable. Suddenly the comments are calling for these horrible parents to be jailed. Suddenly a lot of people are clear on the fact that vaccination is not a purely individual thing. Now they’re going nuts in the opposite direction, from loony libertarian straight to jackbooted totalitarian.

Both are wrong, obviously, because neither works, obviously. The only solution is a balancing act between the different rights.

I know that’s the last thing most people want to hear. It’s much easier to be simple and wrong than go to all the trouble of thinking things through. But the sad fact is that there’s no other way to get to what works. Luckily, in this case it’s not even difficult.

The right to make your own medical decisions is rather worthless if anybody can kill you at any time. The right not to be harmed by others takes precedence over all other rights because they are all meaningless if that one is not respected.

So the balancing act is quite easy: the public health issue of not infecting others with contagious diseases takes precedence over anyone’s personal medical choices.

This is yet one more example of the fact that rights are not equal, that there’s a hierarchy of rights, and that some are more essential than others. Some rights have to take precedence over others or else they all become meaningless.

Therefore the medical and public health requirements for vaccination take precedence over any non-medical objections. There can’t be allowances for religious or philosophical objections. It means the whole US has to follow the lead of Mississippi and West Virginia and have only medically necessary exemptions from vaccination.

That said, though, the idea is to have as high a vaccination rate as possible. It’s not to beat people up for ignorance. So resources need to be directed toward the actual goal, vaccination, and not squandered on useless, resentment-building exercises like jailing recalcitrant parents. Yes, it’s important to stop the Onion mindset of “I Don’t Vaccinate My Child Because It’s My Right To Decide What Eliminated Diseases Come Roaring Back.” Even more important is to see that they get vaccinated, no matter what the voices in their heads are telling them.

Sometimes it takes very little to achieve that goal. For instance, in one health district [update-2015-02-04: near Duchesne, Utah], registering a philosophical objection to vaccination required nothing more than a tick mark in a box. Receiving the vaccination on the other hand cost $25. When the public health officials were trying to figure out how to get more people vaccinated, one bright worker noted that they should invert the incentives. So the vaccination was given free, but expressing a philosophical objection required payment of $25 for “administrative costs.” Which isn’t even a lie.

You know how that story ends. The number of objectors plummeted. The vaccination rates climbed above the medically essential 95% of the population, and the problem was solved, at least from the standpoint of public health. And that’s the first priority.

You are currently browsing the Acid Test by Quixote weblog archives for February, 2015.