Everything from health to wealth depends on science in the modern world, so, obviously, scientific results had better be rock-solid. And yet honesty in science is enforced by what amounts to a gentleman’s agreement, and the penalities for breaking it are nothing more than career damage. Contrast that to financial dishonesty. Its only direct effect is loss of money, but it is regulated by hundreds of laws, and the penalties include jail time.

Scientific honesty has been in the spotlight recently because of fraud in stem cell work by Dr. Hwang in South Korea. Science, which is the premier forum for publishing scientific results together with Nature, plans to have high profile work more stringently reviewed. This is good and necessary, but it only scratches the surface.

Fame and fortune in some fields of science only mean that the corrosive influence money on the scientific process is more noticeable. It’s present everywhere, and is arguably more insidious when it’s invisible. Dealing with that influence at all levels would be more effective than trying to promote stopgap honesty at the top.

You might wonder why it matters if money is involved. There’s a school of thought that believes market forces can solve most problems. So money should act to weed out the more useless kinds of research. One problem with that line of thought is evident in the sentence itself. You or I, as amateurs in quantum mechanics for instance, have no idea what is truly useless or not. But the larger issue is that science has to be about the search for truth in the natural world. Once its primary goal is the search for money, truth inevitably takes second place at the most basic level, and we all suffer sooner or later. (See first sentence above….)

Vaccines are one example of why the influence of money matters. Vaccines themselves are inexpensive. They have to be because they’re given to healthy people who can take them or leave them. Vaccines also prevent expensive problems later on. On the other hand, developing and testing them is as costly as developing a new drug. Drugs can be wildly expensive since they’re given to sick people who can’t do without them. So, in round numbers, both sides are expensive, but all the profit is in drugs.

Companies favor drugs over vaccines. No surprise there. Companies also talk to Congress (rather loudly), and Congress talks to the government agencies that fund most basic research. The talking doesn’t have to involve direct edicts. The process is more like your boss saying it would be nice if someone organized the Christmas party. Within a day, someone has stepped forward without any obvious pressure being applied.

By similar inarticulate processes, research is steered so that there’s more of it on cures than there is on prevention. (This is true of every kind of prevention, not just vaccines.) The influence of money means we have to get sick first and then (try to) be cured instead of avoiding the whole problem in the first place. That’s why it matters whether money steers the process or not.

I’ve made a graphic that shows the ideal scientific process (left) and the actual one (right). Financial incentives, whether as grants, continued employment, or better employment, exert pressure at key points in the real world. The most significant of all, however, is the role they play in determining which questions are asked, not just how they are answered.

(A tangential issue is that the selfless objectivity required by the peer review process isn’t always as evident in the real world as it should be. That’s a rant for a different post, and a problem that also urgently needs solving.) 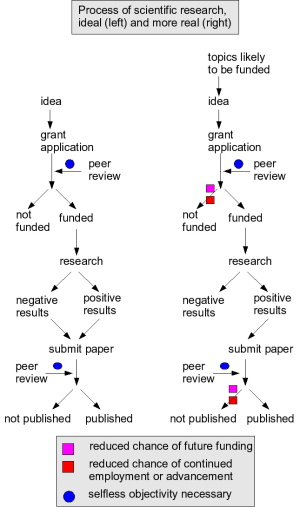 I am not making the point that the monetary obstacles cause fraud, although they can. Outright fraud is a rare problem in scientific work, which is amazing, considering the incentives. The research the vast majority of scientists carry out is true and valid. Using the same example as before, the drugs they find really do cure disease. But they don’t necessarily cure it in the best way, and the question of prevention is never even considered. It’s this subtle effect that is pervasive and, I think, much more damaging than the rare cases of fraud.

Another significant effect of financial incentives is that if negative results are obtained, no further effort is spent on them. Why bother writing up a paper that won’t be accepted, and all the unwanted consequences thereof? (Journals should, but often don’t, accept papers reporting negative results. Just a sampling of studies that show this: 1977, New England J. Med., 2000J. Am. Med. Assoc., 2004, Indiana Univ. School of Medicine, radio program synopsis, 2004, and dozens of others over the years.) One example of what this means is that if one scientist finds that a drug is effective, and nine others find that it isn’t, the one paper is likely to come out whereas the other nine are never written. Time is wasted re-doing research that didn’t work because the information wasn’t available. Worse yet, as in the case of Xanax a few years back, selective reporting allowed the company to advertise the drug as a solution for panic attacks when, in fact, there was unreported research saying otherwise.

The point I’m trying to make is that financial incentives interfere with the optimum flow of ideas. At every stage of the process, money or the threat of job loss shapes research, which means that the real questions go unanswered while scientists work-to-funding.

How did funding become the point of science?

The deeper question is why funding has such enormous consequences for continued employment. To the layman, if a university professor does a good job teaching students, that’s all you really need. Research is all very well and good, but it’s icing on the cake. A university’s primary mission is education.

Well, you would think so, but in reality the importance of research and teaching have been inverted, and there’s a couple of very simple reasons for that. The first is that money talks. We probably won’t be changing human nature any time in the near future, but this part of the problem could be addressed, perhaps, by explicitly forbidding consideration of funding in tenure decisions.

The second reason is less obvious. It’s overhead, which is all the incidental costs of doing business, such as janitors and light bulbs and secretaries. Figuring out the actual overhead cost for a given research project is tedious but do-able, and it’s less than 5% in every situation I’ve heard of. Instead, with a great deal of hand-waving, university administrations everywhere have dumped all sorts of things into that estimate with the result that nearly 50% is the common figure for overhead. Stanford, for a while, was famous for charging 75%.

Those numbers for overhead are possible because large federal and state agencies supply the lion’s share of funding for basic research. (Basic research is the kind that finds ways to cure diseases or go to space, as opposed to applied research, which figures out things like the best shape of pill to deliver the medicine. I exaggerate, but not by very much.) Government agencies see it as their mission to support universities–a Good Thing–and encourage institutions to include the real cost of research, of which overhead is a part. However, loading everything a university needs or wants onto the back of a few research projects doesn’t seem like the most honest and accountable solution.

Since grants are for hundreds of thousands, even millions, of dollars, research overhead becomes a nice slush fund the administrators have made for themselves. It’s also their main slush fund, since what can be done with tuition and endowment money is often strictly controlled. So the administration is desperate for faculty to bring in funding not because the universities’ top dogs are so excited by research, but because they want the overhead. The faculty are in the position of pigs on a leash, trained to find truffles.

The solution to that travesty is simple. Stop allowing grants to include overhead. The solution is also impossible to implement under current circumstances, because it would hit the wallets of all the academic powers-that-be.

What I’m suggesting is that if the university administration needs money, let them have their own class of funding for which they can apply directly. They’d have to state what they want the money for and justify it, like ordinary human beings, instead of shooting for the moon. It would be more honest all around, since it would also allow faculty to stop chasing truffles and do useful work, whether that’s teaching students or researching questions that don’t already have an answer. It wouldn’t necessarily save any money, since research will still need outside funding and since universities can’t make ends meet with tuition and endowments. But the money would be doled out more directly, more accountably, and therefore much more efficiently. We’d get much more bang per buck.

This change, by itself, would alter overnight the dynamics of research, funding, and universities. If researchers are no longer cash cows, it ceases to be important to have all faculty churning out “wipes” on abstruse subjects, such as the fact that different plants grow in the sun and in the shade. (I am not making that one up. Some of this stuff is much stranger than fiction.) Students may even become more than an afterthought on campus.

Administrators would, of course, scream like wounded banshees at having to do their own fundraising for buildings and maintenance. They’d do everything they could to slough the task off onto others in the university community, and since they sign the checks, they can do plenty. So changes in overhead funding will never happen from within universities. The only way to achieve this critical change is for taxpayers to realize that their money is being misused. Taxpayers could get Congress to change the amount allowed for overhead on government grants. It’s unlikely, but the fact remains that taxpayers are the only ones with the motivation as well as the power to call a halt to overhead abuse.

If that utopian state of affairs ever came to be, then the biggest factor deflecting science toward funding would be cleared away. Nobody goes into science for the love of money–the pay just isn’t good enough. By removing the overriding career importance of funding, scientists would be free to follow their muses in more honest and productive ways every step of the way. That would structure the whole process toward honesty, which would work better than tacking on a few extra peer reviewers at the end and hoping for the best.