There is hope for the human race

Any species that is capable of this there’s hope for. 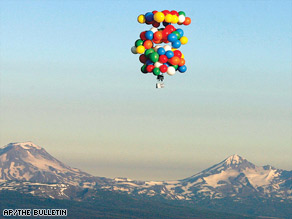 From the report (update: link invalid, but Seattle Times has the same report) (via Cartalk):

With instruments to measure his altitude and speed, a global positioning system device in his pocket, and about four plastic bags holding five gallons of water each to act as ballast — he could turn a spigot, release water and rise — Couch headed into the Oregon sky.

Nearly nine hours later, the 47-year-old gas station owner came back to earth in a farmer’s field near Union, short of Idaho but about 193 miles from home.