The Second Law, that is. This should not be possible unless you add energy to the system. For instance, if there were a giant fan in Los Angeles, blowing their so-called air out to sea. 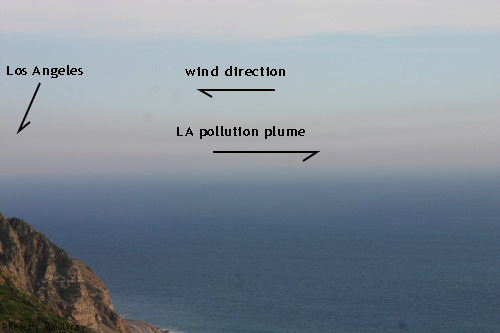 But there is no giant fan.

I saw this while hiking northwest of LA, and it’s not the first time I’ve seen it. This is what the plume of LA pollution normally does. It’s not a matter of ground and upper level winds either. The pollution is near ground level and so was I, going from sea level to about a thousand feet up a coastal mountain.

How does dirty air move out into the ocean against the wind? How? This is really bothering me. If anyone knows how this happens, tell me!

Update: a commenter on this post at Shakesville suggests what I think may be the answer:

OK, maybe…
The polluted air is denser and lies along the ground. Ground drag doesn’t allow it to move as readily as the cleaner, eastbound air above, which thus moves across the top of the smog bank and, being cooler, sinks, displacing the polluted air, which moves west because it is blocked by the coastal mountain range to the east.
cory | 03.11.08