Iceland has a new Prime Minister

This is all over the web, but I want to celebrate anyway.

As I said elsewhere in blogspace today, ah, the sweet smell of rationality . . . .

She is being appointed Prime Minister after the previous government imploded, caught in the worldwide banking collapse. If you read the linked article, you’ll see that the Icelanders care about her qualifications. The femaleness and the gayness that has the rest of the world in a froth are footnotes to them. Why can’t we be like that? Why can’t everyone be like that?

Six things about me

I’ve been tagged by garychapelhill of Electric Blues for a free-floating list. At least, he made it free, and that’s how I’ll take it. So, forthwith, six of the infinite moments that shape me.

1) When I was almost six my family moved to the US from Australia. Until the boat people started arriving, I was one of the last immigrants who’d literally stepped off the boat. That trip was an eyeopener because my family were all sea sick, confined-to-the-cabin type of sea sick. (Those were the days before good drugs for that.) I, however, was not sea sick. So I and the other rugrats on the boat tore all over the place without adult supervision. I went to meals by myself. I did everything on my own. And I never forgot the view from outside, the understanding of the size and weight of authority, and what it was good for and what it wasn’t. Yes, I was a weird five year-old.

2) At sixteen I got early admission to college. The sixties were at the height of their fever (which didn’t happen until quite late in the sixties, actually). I can’t say I was that big on rock-n-roll. But the other two elements of the series were right up my street. Having dived into them, and having had a wonderful time, it became impossible to understand why people would tie themselves in knots trying to avoid sex or drugs. Because, let’s face it, the roots of conservatism in the US have nothing to do with small budgets or small government. It’s all about bottling up sex. (Well, part of it is about having somebody else pay taxes, but that’s another matter.) Now that I’d seen both sides of the issue, the bottling process looked really stupid. It was a useless waste that caused huge suffering. And it robs people, men as well as women, of real highs. Coming you can do in hell, but you can’t find joy there.

3) A couple of years later, I set off on a journey to visit Australia via an overland trip across the breadth of Eurasia. Afghanistan still had a king. It was a long time ago. Of the thousands of windows onto other worlds that I saw, one in particular blew me away for the rest of my life.

I travelled around India by train quite a bit. There were desperately poor people everywhere, and also around train stations. Plenty of people seemed to spend their lives on embankments. My train was pulling out of a huge station (Delhi?) in that leisurely way Indian trains had. It would go a few feet, then stop for a breather. I was leaning out the window, looking at nothing in particular, eating one of a bunch of bananas I’d bought for the trip. I threw the skin down to join some other trash on the gravel of the embankment. (Hey, it’s biodegradable and I was young and foolish.) A little boy of about six with curly black hair and no clothes to speak of swooped out of nowhere and pounced on the skin. He started chewing on the kind-of edible layer on the inside, and grinned at me with complete delight.

I can still see him.

I passed down the rest of the bunch of bananas. I have never again had the same definition of what it means to be poor, or to really need something.

4) Teaching puts you under strong constraints, or it does if you care. It’s not enough to impart the material. You also have to be scrupulously fair about it. You have to treat everyone equally, even if they’re, oh, I don’t know, something completely beyond the pale. Republicans, for instance. I’d been teaching college biology for a number of years, doing my best as far as the fairness thing goes.

And then I met my match. Before, I’d always been able to concentrate on the person and ignore rudeness, weirdness, and all the rest. (Believe me, for rude weirdness, few things beat college freshmen, except maybe high school seniors.) This particular guy wasn’t rude, but he was weirder than a palm tree in a polka dot dress. He was anorexic, cross-eyed, and painfully shy. His remedy for the shyness was to get as many piercings as possible and to dye some of his hair.

So far, so good. I could deal with that. No problem. But for some reason he’d taken one lock of hair right at the top of his forehead and curled it into a long spiral that hung down to the middle of his nose. It was right at the focal point of where his eyes crossed. And he’d dyed it green. It was too much. If I looked at him, I’d find myself staring at that lock of hair in just plain fascinated horror. When I talked to him I had to gaze into the distance over the top of his head, as if I was thinking deep thoughts.

5) Speaking of teaching, I guess doing your job doesn’t normally count as liberal cred, but, well, it’s all I’ve got, really. It was my job to present the facts — that’s one of the advantages to being in the sciences — and it’s well known that the facts have a liberal bent. I didn’t blink that connection. I made sure the students understood not only the facts, but what they meant. I’m the teacher whatshisname (Horowitz?), the guy who thinks academia spawns liberals, warned you about. And I’m proud of it.

6) Last, and least given how much impact voting has, I didn’t vote for the empty suit. Every authority on the planet — political, media, peers, the whole damn boiling of them — had all been hopenotized. But being liberal means you don’t just take the word of someone in authority. You think for yourself. And the facts in that case had an alarmingly anti-hopeful bent. So, yes, this last sad thing counts as a liberal feather in some cap or other.

The final part of this process is supposed to be tagging someone else. Somehow that feels like taking a liberty, but what the hell, in for a penny, in for a pound. I have no idea how you do these things, so there’s no reason to think my tag-ees will even know about it, but here they are:

(That was fun, Gary! Do you know, this is the first time in my life I’ve ever answered to this kind of thing. I don’t promise I’ll ever get my act together a second time, but this was fun.)

An AP story, via the BBC and congogirl

A doctor from the Democratic Republic of Congo who treats women raped by combatants in the war-torn country has been named “African of the Year”. . . .

“I am pleased to accept this award if it will highlight the situation of women in eastern Democratic Republic of Congo,” [he said]. . . .

Denis Mukwege, 53, who runs a clinic in Bukavu, has said all sides have “declared women their common enemy”.

He says his award from the Nigerian Daily Trust paper of $20,000 (£13,700) will be used to fund a centre to help rape victims rejoin society. . . . [In early January] Dr Mukwege was awarded the Olof Palme prize, awarded for outstanding achievement in promoting peace. . . .

His clinic receives an average of 10 new patients every day.

Women in DR Congo are often raped and subjected to terrible violence by armed men as part of the decade-old conflict.

The Panzi hospital helps women with the physical and psychological injuries after being attacked.

It also provides help for women who have contracted HIV/Aids from their attackers.

I don’t have anything to add. I just wish the world was all people like him.

This is a few days old, but I just made my site scalable (should even be legible on a phone??), and I feel like celebrating. So talking about the news won’t do. Flying cars, on the other hand, will.

What’s special about this one, besides the fact that it looks completely goofy, is that it’s here. Right now. This week, says the BBC, the bankrolling “adventurer” and the wild-eyed inventor, Gilo Cardozo, will start the drive, hop, and float across Europe, North Africa, and the Sahara to reach Timbuktu. 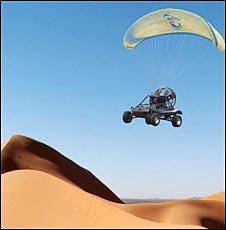 Jan 2.: Please pardon the mess. When it’s all done, the site should look right at any size and in any browser.

Update: Jan 5: I think the regular screen version is pretty much done. (I can’t get rid of the line under the active tab yet. It’s always something.) Let me know if you see problems on your system, and, if so, what the problem is, which operating system you use, and which browser & version you’re running. It’s been tested on Firefox 3b.1 and Internet Explorer 7.

Onward and upward. Next: formatting for small screens / handhelds. Then maybe printers, just for the hell of it.

Update: Jan 9: Gaaa. Just got my hands on IE6 and now see that the site looks like a complete mess. Apologies to all IE6 users out there! I’m working on the needed tweaks. Meantime, get Firefox🙂     (or, if you must, IE7…).

Update: Jan 10: Well, the worst of the problems have been kludged away, as far as I can tell. Let me know if I’m wrong!

You are currently browsing the Acid Test by Quixote weblog archives for January, 2009.