The weirdness of the footwashing Pope

You know why it seems strange that the Pope would wash women’s feet?

Because traditionally the idea is to practice humility toward the “least” among us, the powerless, the poor people.

And this Pope was so focused on his message about poverty, he treated poor women like people.

Women can be seen as people.

And that’s what feels shocking.

I don’t spend a lot of time keeping up with what passes for thinking in the legal system, so I’ve merely been aware that gay marriage rights have been toiling their way through the system. I haven’t paid attention to the arguments.

MoDo’s article came as a bit of a surprise to me. (Yes, I know, she can be a twit. But she can also write and sometimes I read her. So sue me.)

This is what stopped me short:

And their rights are so clear I’m flabbergasted that it could need explaining, to a Supreme Court Justice, of all people.

Apparently, the Court Jesters Justices don’t even know that.

“But you want us to step in and render a decision,” Alito continued, “based on an assessment of the effects of this institution, which is newer than cellphones or the Internet? I mean, we do not have the ability to see the future.”

Swing Justice Anthony Kennedy grumbled about “uncharted waters,” and the fuddy-duddies seemed to be looking for excuses not to make a sweeping ruling.

The economy is not a dippy duck

Politicians make pious noises about governments “living within their budgets.” According to them, this is how “families” do it. 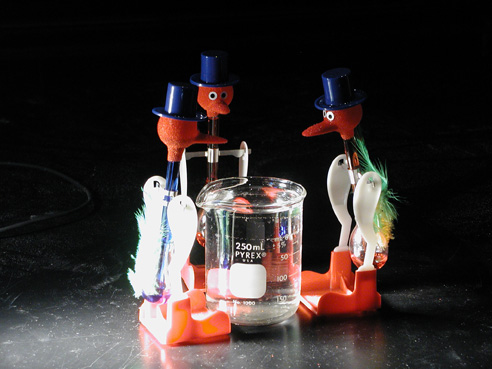 The water goes only one way for a dippy duck

Intelligent economists — Martin Wolf and Krugman to take just two — are rightly incensed at that self-serving nonsense (whose real point is to prevent tax hikes on the wealthy, but that’s a ‘nother whole mess).

Unfortunately, they don’t provide an easy way to visualize the difference between citizen and government finances. Krugman, for instance, otherwise one of the best examples of lucidity, uses the analogy of a babysitters club. It’s a fine analogy. There’s nothing wrong with it on the merits. But if it means something to you, you already understand the economy and you don’t need it. The rest of us could use something simpler and more visual.

Acid Test to the rescue.

Individuals get money from somewhere and spend it elsewhere. The path can only go in one direction. If the source of money dries up, there is no way to magically make more appear.

An economy, however, is millions of people. (Except when countries are smaller, but you know what I mean.) Each little unidirectional flow adds together into an enormous wheel, like a water wheel. 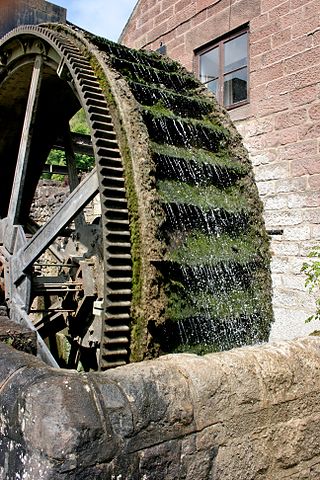 The water still goes one way
for a single board in the wheel.
Mike Peel

It is not linear. It is not unidirectional. It is not like a dippy duck, whose beaker can’t turn over and reappear filled. It is like a wheel.

In a whole economy, the flow on the individual parts makes the whole thing turn. The wealth — or the water — does need some added external input such as a stream or farmers making something out of sunlight and land. Once that stream enters the system, whether it’s made of water or money, the wheel can turn and multiply the benefits.

If you turn off the supply of water on the wheel, the whole thing stops. When it happens in the economy, it’s called a Depression and it means less money everywhere on the wheel. For an individual, cutting back spending to match income leads to wealth. For an economy, if it’s grinding to a halt, reducing spending equals losing money. The slower the wheel turns, the less money there is to be had. Everybody gets poorer, not richer. That is not what solving the problem looks like. That is what stupidity looks like.

That’s why, if people have no money to spend, it makes sense for the government to spend. The wheel needs to be kept turning. Otherwise poverty feeds on itself.

(And, yes, if the economy is humming with minimal government help, then keep it minimal. Developed world economies are not, you’ve probably noticed, humming.)

The government can’t just spend without any regard to the wealth of the economy. But that’s not the same as declaring wealth off-limits and then driving the economy down to a trickle because “spending is bad.”

What’s bad is waste and poverty. What’s bad is grinding the whole wheel to a halt because you can’t see the difference between a straight line and a circle.

Now is the time for your tears

Women have no voice. Their songs aren’t famous, so the only words I can think of adequate to Steubenville belong to Bob Dylan. And he, of course, is talking about murder, not that stuff which, when it happens to women, is something to joke about.

But you who philosophize disgrace and criticize all fears
Take the rag away from your face
Now ain’t the time for your tears.

But you who philosophize disgrace and criticize all fears
Take the rag away from your face
Now ain’t the time for your tears.

Hattie Carroll … Got killed by a blow, lay slain by a cane …
And she never done nothin’ to William Zanzinger

And you who philosophize disgrace and criticize all fears
Take the rag away from your face
Now ain’t the time for your tears.

In the courtroom of honor, the judge pounded his gavel
To show that all’s equal and that the courts are on the level …
And that even the nobles get properly handled …
Stared at the person who killed for no reason
Who just happened to be feelin’ that way without warnin’
And he spoke through his cloak, most deep and distinguished
And handed out strongly, for penalty and repentance
William Zanzinger with a six-month one-year sentence.

Ah, but you who philosophize disgrace and criticize all fears
Bury the rag deep in your face
For now’s the time for your tears.

One year. One. For the premeditated, prolonged, published, endless soul-destroying torture of a human being.

(The complete lyrics are here.)

If it costs money, it’s dumb

Even more so if it costs anyone who’s already comfortable.

From Krugman, this priceless proof They are always, always, trotting out the same claptrap. Spending anything for the common good is weak, namby-pamby, woolly-minded unwillingness to face hard choices.

[W]hat The Economist said, in 1848, about proposals for a London sewer system:

Suffering and evil are nature’s admonitions; they cannot be got rid of; and the impatient efforts of benevolence to banish them from the world by legislation, before benevolence has learned their object and their end, have always been more productive of evil than good.

It wasn’t until the Great Stink made the Houses of Parliament uninhabitable that the sewer system was created.

The sad thing is our modern Great Stinks and Great Warmings will be so bad by the time they reach our well-insulated elites that we’ll be neck-deep in the Big Muddy and there’ll be nothing to do but hope we float.

The cloud bait and the Chromebook 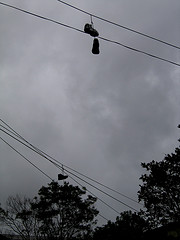 Shoes on a powerline; supposed to be the mark of drug pushers nearby.
(deepwarren)

There’s excitement about the Chromebook Pixel. It has a good screen. It’s light. It’s Google.

[T]he Chromebook Pixel comes with … 32 GB of space …, and if 32 GB isn’t enough room for you, the company also throws in 1 terabyte, or about 1,000 GB, of space through its Google Drive service.

…[O]f course, you’ll need an Internet connection to access those files. You get the 1 TB of storage for only three years. After that, you’ll have to pay $50 a month to keep it.

Do you know how much a 1 TB hard drive costs right now? About $90. That’s for the whole thing. Not per month. Not even per year. Three years from now, they’ll probably be going for about $25.

That might seem fine. You get your three free years, buy your cheap drive, and come out way ahead.

Except that transfer speeds matter if you want to move all that stuff to your nice new drive. If after three years of uploading photos and video clips you had all of 100 gigabytes stored in the GOOG’s cloud, then at a 500Kb effective download speed it would take about 650 hours, or about one month, to download it all to your own drive. Calculate it for your own situation here.

The US was supposed to have an average broadband speed of 6.7 mbps in early 2012. That’s 837Kb of data per second. My own service right now is supposed to be giving me over 1Mb per second, but that only happens occasionally. 500Kb is a good day. Evenings and weekends it can slow down to dialup modem speeds. That would, of course, make the downloading take that much longer.

(On the other hand, if you live in Japan or South Korea with a regulated broadband industry, you may get 1Gbps tranfer speeds or more and none of this applies to you. It’d take you only minutes to get your stuff.)

So, there you are, faced with babysitting a download for weeks or suddenly forking over $50 a month. How many people will go, “Oh crap. I better pay this month and figure out what to do about it next month”? Enough to make it a lucrative business model? You bet.

President Barack Obama raised anew the issue of cutting … Medicare and Social Security as a way out of damaging budget cuts, … as both sides in Washington tried to limit a fiscal crisis that may soon hit millions of Americans.

Did I miss something? Are Social Security and Medicare just optional little programs to burn money?

It’s either them or me that’s insane.

You are currently browsing the Acid Test by Quixote weblog archives for March, 2013.