Acid Test
Acid Test
Previous post: « The multiverse seems to be an excuse
Next post: The USA officially supports torture »
posted in Thinking out loud

Taking hostages is not okay

Maybe the worst thing about dealing with toxic waste like ISIS is that it infects people trying to stop it.

The Lebanese army detained a wife and daughter of Islamic State leader Abu Bakr al-Baghdadi as they crossed from Syria nine days ago, security officials said on Tuesday, in a move seen as likely to put pressure on the Islamist chief. …

The Lebanese newspaper As-Safir reported she had been detained in coordination with “foreign intelligence”.

It would be one thing if she were providing some kind of essential function — smuggling the secret code to the Mad Scientist’s Doomsday Weapon or something. But considering the standing of women in ISIS, which is somewhere below eggplants, there’s no indication that she was actually doing anything. The most I saw somewhere was that somebody thought maybe she’d know something about locations of some kind.

The kid, of course, has even less to do with anything.

So this is hostage-taking pure and simple.

Which means even when ISIS is driven back into the rubble it’s made, we’re becoming them. They’ll lose. And so have we. 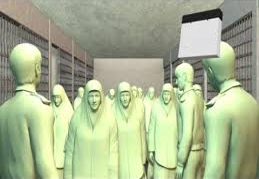