Archive of posts on rights and government

People who go to war always say they do it to serve — their country, an ideal, their way of life, always something outside themselves. But then when the fighting is obviously destroying everything they or anyone cares about, they would stop, wouldn’t they?

Being a good Randian, he believes property rights trump everything, which means that there would be no real civil rights at all. If the only place you have rights is in government buildings, you may as well use the Bill of Rights for bird cage liner.

I don’t spend a lot of time keeping up with what passes for thinking in the legal system, so I’ve merely been aware that gay marriage rights have been toiling their way through the system. I haven’t paid attention to the arguments. MoDo’s article came as a bit of a surprise to me. (Yes, I know, she can be a twit. But she can also write and sometimes I read her. So sue me.) This is what stopped me short: “Same-sex marriage is very new,” Justice Samuel Alito whinged, noting that “it may turn out to be a good thing; […]

Politicians make pious noises about governments “living within their budgets.” According to them, this is how “families” do it. The water goes only one way for a dippy duck Intelligent economists — Martin Wolf and Krugman to take just two — are rightly incensed at that self-serving nonsense (whose real point is to prevent tax hikes on the wealthy, but that’s a ‘nother whole mess). Unfortunately, they don’t provide an easy way to visualize the difference between citizen and government finances. Krugman, for instance, otherwise one of the best examples of lucidity, uses the analogy of a babysitters club. It’s […]

Even more so if it costs anyone who’s already comfortable. From Krugman, this priceless proof They are always, always, trotting out the same claptrap. Spending anything for the common good is weak, namby-pamby, woolly-minded unwillingness to face hard choices. [W]hat The Economist said, in 1848, about proposals for a London sewer system: Suffering and evil are nature’s admonitions; they cannot be got rid of; and the impatient efforts of benevolence to banish them from the world by legislation, before benevolence has learned their object and their end, have always been more productive of evil than good. Sewers are socialism! It […]

Copyright monopoly must take a back seat to constitutional rights.

Now can we start refusing to be cattle instead of customers? Instagram says it now has the right to sell your photos – CNET News: Under the new policy, Facebook claims the perpetual right to license all public Instagram photos to companies or any other organization, including for advertising purposes, which would effectively transform the Web site into the world’s largest stock photo agency. One irked Twitter user quipped that “Instagram is now the new iStockPhoto, except they won’t have to pay you anything to use your images.” These services are “free” the same way the supermarket is free for […]

(Fair warning: one of those loooong posts.) Nobody can choose to live without limits. Anybody who tries just ends up crashing into them. Eating without limits will make you too sick to eat at all. Gas guzzling without limits will end in no gas — or enough global warming to make the whole thing moot. (That’s not an exclusive “or.”) Too much information causes overload, not wisdom. There are always limits. Too much information (Illustration: John Tenniel) The only real choice is whether to recognize the constraints instead of crashing into them and whether to find optimal ways of working […]

No. No, no, no. This is not about free speech as opposed to beliefs. It better not be. If it is, we’re headed straight for holy wars. I’m talking about this sort of thing: BBC News – Film protest: Egypt PM urges US to end ‘insults’. “At the same time we need to reach a balance between freedom of expression and to maintain respect for other peoples’ beliefs.” There is no way to “respect beliefs” and have freedom of speech. It’s impossible. Think about it, Minister Qandil, for a microsecond. If my belief is that you speak drivel and should […]

Religious nuts belong in padded cells with the other nuts. They think they can say anything they want, no matter how untrue and nasty it is. And because it’s based on something they call “religion,” nobody wants to deal with them. There was the kook in Florida who was going to make a big deal out of burning the Koran. Apparently in his mind that shows the superiority of something he believes in. That time people died in the Middle East and Africa. This time another lunatic’s hate speech has led to more deaths. Ambassador J Christopher Stevens reportedly died […]

I’ll admit it. I have an axe to grind with search engines, and there’s a rant coming about them Real Soon Now. But the following just cries out for immediate carping. Via Groklaw – Digging for Truth, Volokh and Falk (pdf) on the topic of free speech protections for search engines: …search engines are speakers. First, they sometimes convey information that the search engine company has itself prepared or compiled …. Second, they direct users to material created by others, …. Such reporting about others’ speech is itself constitutionally protected speech. Third, and most valuably, search engines select and sort […]

The Prop. 8 stuff here just goes on and on and on. The anti-gay marriage crowd is using the law to delay civil rights as long as possible, and the courts let them get away with it because due process is more important than the rights the process is supposed to protect. It would take any normal human being outside the law about a quarter of a minute to figure it out: 1. Are all people considered equal before the law? Yes. Go to point 2. 2. Can some people get married? Yes. Go to point 3. 3. Therefore: all […]

Seriously. It’s time. The whole Republican birth control bullshit (and I do mean bull) has brought the issue to levels of absurdity that require action. First, notice one thing about the sex issues of the last few decades. They’ve been about birth control (1950s), then abortion (1980s onward), now, God help us, birth control again. Supposedly, it’s all about life, but there are also plenty of outbursts that sex is irresponsible, thoughtless, and no longer “special” when there are no “consequences.” But sex has always been that way. For men. They’re famous for it, or at least they try to […]

I’ll say up front that I don’t know the answer. Everything that’s been tried up till now has real problems, so I’d like to throw some ideas out there. The current discussion about (the difficulty of) decision-making in the General Assemblies at #OccupyWallStreet is what jogged me to post. Update, Nov. 16, 2011. Law enforcement is clearing out the encampments of #Occupy. That’s dictatorial, but it suggests a broadening of tactics, which would have been a good idea in any case. Too few people have the financial freedom to camp. Winter is unfriendly to campers. The Occupations could move to […]

Sometimes I think I may have something to contribute to #OccupyWallStreet. Sometimes I don’t know. The only people who would know are you, if you’ve seen what I’m talking about. So, well, here goes. Sorry that I’m talking about my own stuff. I don’t know any other way to let you know about it, and it may be worth your time. I’m not trying to answer the question about “What’s the message?” The message is “A fair deal for the 99%!” Obviously. Nor does anyone need help with some of the great tactics OccupyWallStreet is already using. But I might […]

Now comes the hard part. Mohammed El-Baradei talked about the “joy and happiness of every Egyptian at the restoration of our humanity and our freedom.” Unfortunately, no. The regime is out. The restoration is yet to happen. If the Egyptians manage that, too, then I’ll be really exhilarated. Maybe then they can show us how to do it. Meanwhile, I’m hoping and hoping that the parking on the left doesn’t just turn into parking on the right.

Ethics, or figuring out which way is up 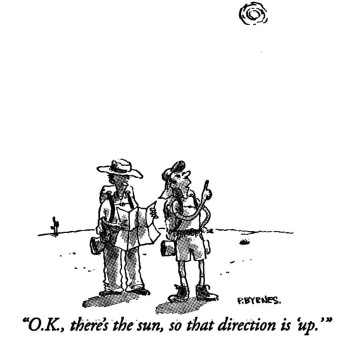 You are currently browsing the archives for the government category.