I, for one, welcome our new robotic overlords

So long as they’re this much fun.

I can’t write about this.

Wael, said he had seen a six-year-old die after being tortured and starved.The 16 year-old told the report’s authors: “I watched him die. He only survived for three days and then he simply died.”

No. We should not respect other people’s beliefs

No. No, no, no. This is not about free speech as opposed to beliefs. It better not be. If it is, we’re headed straight for holy wars.

“At the same time we need to reach a balance between freedom of expression and to maintain respect for other peoples’ beliefs.”

There is no way to “respect beliefs” and have freedom of speech. It’s impossible. Think about it, Minister Qandil, for a microsecond. If my belief is that you speak drivel and should shut up, you can say nothing. If your belief is that I speak drivel and should shut up, neither of us can say anything if we’re both going to be “respectful.” Or, if we both talk and infuriate each other, then the only way to get “respect” is to silence the other. And only the dead are silent.

The malicious film is not a problem because it insults a religion. It’s a problem because its whole and only purpose is to inflict hate on people. It is not making a political statement, it is not arguing about anything. It’s trying to spit in the eye of people it hates. That is hate speech. It is incitement to riot. It is already illegal. It is an abuse of free speech. It is not protected under free speech laws.

The only problem is the growing US inability to understand that religion is a belief system, not an excuse. We should not lose all ability to tell right from wrong just because somebody hangs a judeochristian religious label on crap.

(Although when it involves a Muslim, the FBI seems to see “material support” for terrorists where only criticism exists. One example: Glenn Greenwald on the arrest of a person expressing outrage over the Abu Ghraib atrocities.)

We should take a deep breath, take our courage in our hands, and actually be responsible for some judgment calls. Avoiding responsibility with wishy-washy excuses about not having any right to judge anyone means only handing a blank check to the biggest bully to do their worst.

It’s pretty obvious where that leads. Haters incite hate and before you know it, real people with real families and real friends have died.

It becomes hate speech when you insist on rubbing my mind in your hated message. Then the intent is to hurt. Not to communicate. Then it’s hate speech.

That revolting film wasn’t noticed by anyone but the revolting people who made it. Pathetic, but not a huge issue. They didn’t like that. So they paid to have it translated into Arabic. That is hate speech, pure and simple.

We don’t have to slavishly avoid offending every bizarre — or even ordinary — belief system on the planet. We have to enforce our own laws against hate speech and incitement to riot. As a matter of fact, the solution is to be more willing to offend beliefs. When somebody’s beliefs result in hatred and harm we have to be ready to stand up to them and say, “NO.”

This is weightlifter Jonathan Walker hoisting the winning 119lb, 54kg, marrow grown by Peter Glazebrook. That’s a zucchini to Yanks, although arguably the diminutive “-ini” ending is not appropriate here. As with most critical news, this report from the Harrogate Autumn Flower Show came from the BBC. 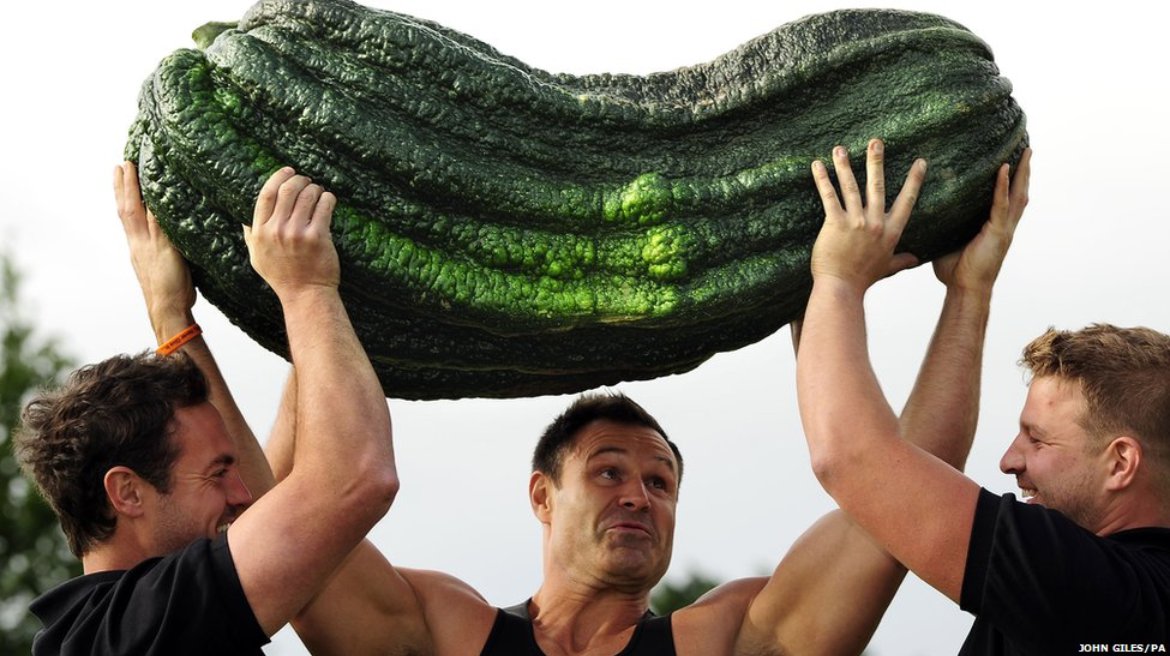 Religious nuts belong in padded cells with the other nuts. They think they can say anything they want, no matter how untrue and nasty it is. And because it’s based on something they call “religion,” nobody wants to deal with them.

There was the kook in Florida who was going to make a big deal out of burning the Koran. Apparently in his mind that shows the superiority of something he believes in. That time people died in the Middle East and Africa.

This time another lunatic’s hate speech has led to more deaths.

Three other Americans were also killed and the consulate set ablaze.

Update 2013-05-14: The four deaths at the consulate seem to be unconnected to a specific hate speech event. Hate speech repeatedly incites people to kill, but this is not an example of that as it turns out.

Not only that, but Nigeria, Tunisia, Algeria, Afghanistan, Sudan, and probably a score of other places are having to take steps to prevent — they hope! — violence. That’s effort, time, and money better spent on real needs, not on hysteria whipped up by infectious mental patients.

These troglodytes are a terrorists. We have a whole goddamn department of government to deal with terrorists these days. Why are they asleep at the switch?

The Biblebangers have no right to spew hate speech and incite riots. Why aren’t the creeps thrown in dungeons for their flagrant flinging of poo?

What is it going to take for people to wake up to the fact that we have to stop giving religious nuts a free ride? Religion is a belief system. It’s not an excuse.

Update Sept. 15, 2012: [Following link bad 2015-05-07, but this one has the same points.] Roger Ebert adds some points about the complete lack of merit in the clip and its purely inflammatory nature. One real give-away for the intent to inflame: when it didn’t get enough Muslim attention, our local loonies paid to have it translated into Arabic.

Update Sept. 18, 2012: I can’t resist a you-heard-it-here-first remark. Sarah Chayes opinion piece in the LATimes going into more detail as to exactly how much the Nastiness of Christians film is incitement to riot.

The Democrats are running on this?

Do I have this right?

We need to vote for Obama and others with a “D” behind their names because the Republicans threaten the fabric of civilization and life as we know it.

After we’ve done that, everything will be fine because Obama will come to grand compromises with those same Republicans.

The compromise will be to reduce people’s Social Security and Medicare benefits.

This will save the federal government money. (By taking it out of your Social Security and Medicare. It will not save you money. You, according to the Democrats and the Obama campaign, think this is a good idea.)

By saving the government money, it will deal with the deficit.

It will not deal with jobs, health care, working till ninety, student loans, jobs, taxes, schools, or jobs.

Sounds like a winner to me. And so easy to tell apart from the Republican platform, which wants to cut Social Security and Medicare.

You are currently browsing the Acid Test by Quixote weblog archives for September, 2012.